Michael Cawood September 5, 2013 in 5) Animation, collaboration, off-site, on-site, remote, virtual studio, visual effects, work from home
Working remotely requires a strong capacity to trust other people. By default, meeting good reasonable people in person builds trust. Getting to know someone immediately in front of you will generally result in much stronger bond of trust than working remotely. I’ve noticed that the further away from ‘in-person’ you are from a relationship the more people instinctively demonize each other, or ‘them’. Regular video chat can be helpful, talking on the phone is almost as good, instant message is the next step, email is convenient but its the absolute limit of a modern day working relationship. Anything less and the other person becomes the enemy. 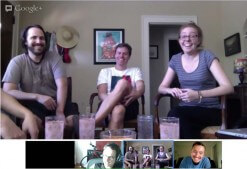 What’s alarming is how two sets of reasonable people with the best of intentions assume flaws, fault, laziness, selfishness, and all kinds of other issues upon each other as the communication methods reduce down to email. Cultural differences throw up defenses even faster.
I’ve caught myself making the same assumptions at times, but I push through it and try to see the other side’s perspective. The less you know about the other person though, the harder it gets to relate to them, so it’s only natural for us to demonize the unknown.
Different personality types handle it quite differently. The more trusting and laid back someone is the more likely they can work well with others remotely, but equally the more likely they are to be taken advantage of. The more of a control freak they are the less effective their ability to work remotely. I’ve seen both character types in my working life, and they bring very different strengths to the table. 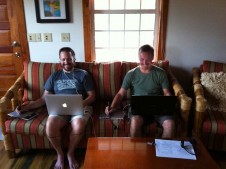 I am definitely more inclined to be a control freak, so when I chose to make ‘Devils, Angels and Dating‘ through a virtual studio (I.e. remote artists collaborating on the internet) it went completely against my nature. I am very capable of chilling out and delegating, and I do it all the time, but it gets harder the more I care about the outcome. I had to give up control in bite size chunks for years in order to work with over a hundred artists that contributed their valuable time and talents to the film. It wasn’t easy for me. Some people that were close to me through the experience will be able to tell you that I expressed frustration on many occasions as I had to wait for work to come back, slow responses to my messages, and often when I’d see someone do something in a way I wouldn’t have done it myself. But adjusting to it, has given me an extra-ordinary level of empathy for others for future projects.

Since finishing the film I have encountered many artists that crossed my path during the making if the film. Some asked to work on it and ultimately couldn’t due to other commitments. Similarly some started and had to leave before they could finish. Both types of artists tend to apologize, and I always have a very understanding approach and all is forgiven without fault, as I know how much life can get in the way. I’m simply very grateful for the help and support I did get. 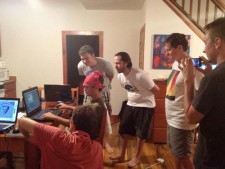 I tend to make lots of tiny efforts to get to know my co-workers experience when I work with them in person. These days it’s very easy with portfolio websites, showreels and LinkedIn. But it’s a common event in our business to talk about previous work experiences as well and in this way you gradually figure out who you’re working with. Who has the answers. Who knows what they’re talking about, etc… When you can’t have those little conversations all you have is what’s online so it’s critical that what is online is complete and available. I’ve worked at a few studios now where I’ve been handed the reigns to supervise sub-contracted studios, often without me being told much at all about the studio or it’s crew. I can literally be handed a point of contact that has no studio name, no resume, and no portfolio. The assumption is that someone else has done the vetting… but that simply leads to an enormous potential for mis-trust. I’ve tried to push through it and give them the benefit of the doubt, and I know for a fact that in some cases they have been mis-handled so they couldn’t be blamed entirely for failing to deliver. But the next time it comes up I’m asking for everything I can get about a studio or artist I’m asked to supervise. Eliminate those questions, and understand who you’re dealing with!
Conversely I’ve also been on the other side working remotely. Often there’s a layer of people between me and the person that’s actually meant to be directing me. Each person says a little bit less than they need to until the direction I get is so vague as to open up the work to massive changes in interpretation. Sometimes I’ve been lucky and they weren’t fussy but usually they will know better what they don’t want and I’ll be set back on a path to creating something else, but again the brief is often not specific enough for me to get it right first time. It’s all about communication and I try very hard to make sure I’m clear, but I’ve not always been as fortunate in the written briefings and responses I’ve had back. Often broken English, poorly chosen spell-check results and bad grammar. At best all I can do is return the message asking for clarity, but even that can be taken as an insult as they remember what was in their head when they wrote it, they don’t often re-read their messages to see what I saw (this is where task specific conversation threads or forums are better than emails).
Curiously I’ve worked in studios that completely lock down outside communication to the degree that there is no internet or email, so this would definitely be considered ‘on-site’. But that doesn’t necessarily mean that communication internally is better. If someone isn’t a good communicator in person then sometimes the written word can be more effective. Lets face it this industry attracts plenty of people that aren’t the best communicators in person, so perhaps more access to systems that work well remotely in the written word will help those personality types.
People tend to fall into one camp or the other, most in the ‘on-site’ camp. But in the real world we’re getting closer and closer to a society that’s capable of, and might even prefer, the ability to work from anywhere to keep life quality up and living costs down. So I’m in favor of a smart blend of both. I can envisage a great production pipeline that has a few pools of on-site people working quickly together for key departments, and a well connected web of off-site workers dealing with skills that require less communication. The two come together to lower costs where it’s needed, increase life quality and improve communication. Further to this vision I’ve written about Virtual Studios.Note that pictures were from the short film collaboration, The Ocean Maker, that experienced both extremes of on-site vs off-site work.