Michael Cawood September 1, 2013 in animation studio, collab, collabs, coop studio, devils angels and dating, love in the time of advertising, remote, remote collaboration, theory animation, virtual studio
For Siggraph 2013 my friends and I put on a presentation along with a question and answer session to talk about remote collaboration. The following is a summary of the introduction I gave and two videos containing the audio, slide shows and clips we showed at the event.

The United Nations predicts that by 2050, 70% of the world’s population will live in the cities. Can you imagine that? In terms of mankind, as one big machine, cities are essentially more efficient. But on the individual level, they’re expensive and you can expect a lower quality of life for your earnings. I’d like to challenge that prediction, and suggest that the U.N. hasn’t accounted for the increasing development of remote collaboration, and in the case of our industry, Virtual Studios.
I’m going to use animated features as an example for our discussion, but many of the principles apply to visual effects, TV series, commercials, games and many other industries. Let’s jump back in time first to remind ourselves of some of the biggest changes that have occurred in the animation and visual effects industry since it began.
Style – Traditional 2D dominance has stepped aside for 3D CGI and Stopmotion
Talent – Once rare animation talent has become abundant
Quality of life – Medium to High quality of life has dropped to Low and Medium quality
Quantity – The number of animated feature films per year has risen significantly
Studios – The number of animation and VFX studios has gone up
Cost – Features cost a lot in the past, and even adjusting for inflation they still cost a lot today. But do they have to?
In the past we’ve had one studio working in one location with a large number of people involved. Production gets a great deal of efficiency out of this. However to find that amount of talent in one place you tend to have to setup your studio in a major city. 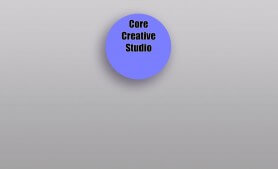 As time goes by studios have looked to cut costs by bringing in cheaper sub-contracted studios. These are medium sized creative studios that plug into the larger studio adding small inefficiencies that tend not to be accounted for alongside the savings. They are just tolerated and the blame for the inefficiencies is cast on ‘the other guy’… you know, the one that’s not in the office with you that’s easy to blame. 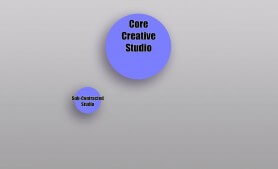 As we extend this trend productions take on more cheap studios, but each time we add a new outside studio the complexities increase and the inefficiencies exponentially increase. Now there are more middle men moving information and assets around, delaying the creative process and in those delays are wasted man hours as the information doesn’t move up and down the pipeline in time to stop people going down the wrong paths. Every-time someone invests themselves in something that is then cast aside because it wasn’t wanted, people get bitter and less invested in their work.
Further to these issues is a sense that ‘the other guy’, the one that’s not sitting right next to you, is not pulling their weight, or doesn’t know what they’re doing. Cultural differences can multiply this effect but putting that aside it’s simply natural to trust the person in the room with you more than the person you can’t see. Body language, eye contact, tone of voice…. there are so many factors that help us trust each other and when they’re masked, delayed or taken away completely it’s natural to view every failure as systematic of laziness or incompetency. 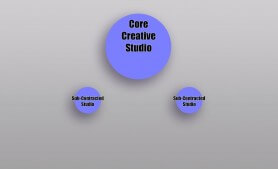 Switching to another issue, different areas cost different amounts to live. The cities have the highest cost of living and the lowest quality of life for your earnings. The towns have a medium cost of living and the potential for most people to consider buying a home, with a reasonable quality of life. Then there are the low cost of living areas where interesting projects in our industry may not be as abundant but buying a home is affordable and you can have a high quality of life for your earnings.
Most people in our industry aim to get into the cities where the work is, to increase their job prospects and gain higher earning potential. But as they do so they’re raising their cost of living, the number of hours they’re working and commuting, reducing the chance they can purchase their own home or spend time with their family. 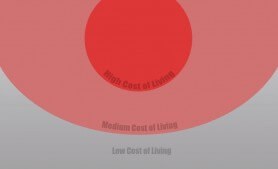 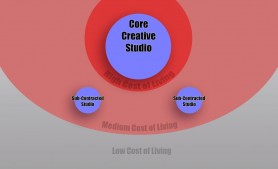 Occasionally projects add the odd independent contractor, or freelancer, to it’s project, working from home. It’s easier than ever before these days to do this but it still adds to the inefficiencies of the production as information passes around slower and resentment about ‘the other guy’ builds up. 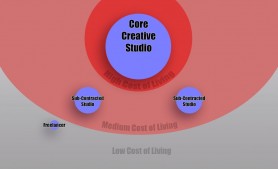 This is where I want to introduce the concept of a ‘Virtual Studio’. An online set of tools for creating and communicating between team members. A way to track assets, shots, versions and staff. A system designed to keep everyone informed of the project’s progress, let them see where their work fits into the project quickly whilst keeping them informed of changes that would affect them. It’s as much about keeping up moral, showing steady progress and making them feel a part of the process as the day to day file sharing. 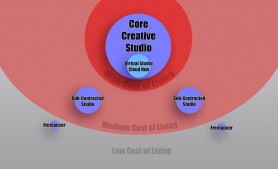 This sort of system is often developed in-house to cater to the minority of workers offsite. But once it’s complete and covers enough of the pipeline it doesn’t matter where the system is developed, and the tools and storage itself can be off-site, just like a great deal of the rest of the pipeline. 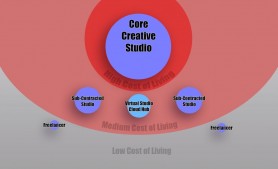 Once everyone gets used to depending on the online system it makes it easier to consider working from home, and then from a cheaper, nicer home in some other town… and so on, until most of the production is working more manageable hours in nicer working conditions, living in better homes with families and social lives, with pensions, healthcare and savings…. ah there’s the dream. Well maybe it won’t solve all of those issues but it certainly would be a big step in the right direction. 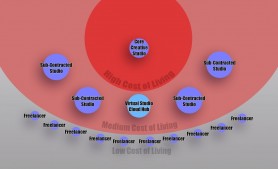 You’re still always going to want to have your key decision-makers working as closely as possible, i.e. directors, producers and some leads and supervisors. This means they’ll be the few team members that will want to stay close to each other in the cities. But if the high cost areas don’t have to house the entire team, then the cost of living goes down there too and even they can live better lives. 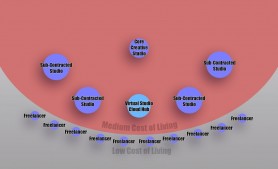 In truth anyone that’s been in production enough knows it’s not as simple as that. All too often the top decision-makers want to see the people making their products on hand, in the same office. But this can sometimes have more to do with their own insecurities than the actual results. It feels better to see the people you pay getting on with their work. So the next big step in making remote collaboration a success is going to be some sort of tool that can give everyone in the pipeline the re-assurance they need that everyone is getting on with their work and they’re going in the right direction.

The biggest innovation that my short film ‘Devils, Angels and Dating‘ brought to virtual studios was the Facebook-like news feed on the front page. With this no matter what time someone checked in they could see new progress being made in all departments. It was very re-assuring (a lot like Facebook is for your social life). But it’s only part of the solution. That works to ensure that the ones that are working, are doing something. But it doesn’t reveal anything about the ones that aren’t, and that’s what would worry the decision-makers the most. Enough to avoid remote collaboration.

I’ve heard of productions keeping a Skype window up and active during work sessions, which creates the feeling that you’re both active. But that requires a lot of bandwidth and only works for small teams. If you’ve seen the TV show 24, you may remember the small vertical video chat devices they all seemed to have beside their computer monitors. If we could get used to these being turned on more often, without feeling the pressure to fill the void with conversation then we could get to a place where everyone can see each other working. To reduce the bandwidth maybe we could have some software that only updates the image when it changes significantly, i.e. it doesn’t send changes to the image if someone is barely moving in the frame, which is often the same when they’re working. But wave a hand or say something and it activates more bandwidth so that the image updates smoothly again. Ultimately though this is an implementation of current tech, and I suspect it’ll be a new tech that changes our habits more and really brings the change we need.

Virtual Studios have a long way to come to really make an impact, but most of that distance has more to do with perception than what’s possible with the technology we have. It’ll only take one big success story to start a wave of copy-cats. Proof of this has already occurred in the collaborative short film making market. When I started making my short film, hardly anyone was doing it anymore. There had been so many failures people were pulling away form big volunteer projects in favor of smaller portfolio pieces. I pushed through the naysayers, created a unique new platform and lead the way to where we are now. And where are we now? With more short film collaborations in production than there’s ever been, using a variety of tool sets either similar to mine, or in a few cases even directly copied from mine. I’m quite proud of that, and it’s likely the biggest accomplishment my little project can boast to. To this day I’m a big supporter of other collaborative projects, helping the team leaders with tips and tricks to make it work for everyone involved.

To finish off here’s the Question and Answer session from the Siggraph presentation, which went on quite a while and brought up some very interesting issues for discussion.