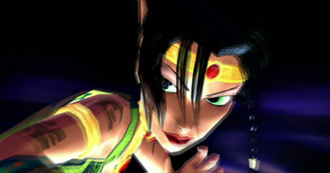 I worked on this game for three years over a decade ago. Now there’s a ‘making of’ video doing the rounds. It is a good game… it’s fascinating to see how well it holds up, and how in other areas it’s dated. About half the footage they used here was from my pre-rendered cut scenes. Some good, much of it looking a bit shaky now…. largely I’d put that down to not having the budget and the team size you’d expect on a project like this today (it was also my first time doing pre-rendered HD 3D as well). But I learned a lot from this and there were many, many improvements over what I’d been able to do in the real-time cut-scenes I did for Starfox Adventures (which was somewhat limited by starting out as a cartridge game on the N64).

Anyway if anyone is wondering what the fuss is about go get the Rare Replay collection, Kameo is one of the best reasons to get it.