Michael Cawood April 15, 2013 in 5) Animation, animated, animated short, Lucas Martell, Pigeon Impossible, short film, the oceanmaker
The Ocean Maker started it’s IndieGoGo crowd-funding campaign and the Director, Lucas Martell, has been posting videos, news, interviews and much more related to the project giving everyone a sneak peak at the film and the unique production that created it. I thought I’d chip in and tell a little of my story surrounding the film.

Way back in 2008, I first contacted Lucas when I was researching my move to Austin, Texas. He was not far from completing his short film Pigeon Impossible while I was simultaneously getting up to speed developing Devils, Angels and Dating. We got to know each other over the years and became firm friends.Jump to 2012 and Lucas was working in the same studio as me in New York. He told me he wanted to have a chat about an independent project and we met to discuss this outlandish concept of forming a team to make a short film in a remote location. He does a great introduction to the concept in his video for the crowd-funding campaign so I won’t go into too many details. Suffice to say, it wasn’t an easy sell initially and there were plenty of problems to anticipate. But he was pretty passionate about the idea, and considering how long I’d waited to find an excuse to work with him on something, I was already more than a little disappointed that I couldn’t (at that time) commit a chunk of time to work on it. Regardless I read the script and offered my notes and assistance with recruiting a team to fit his needs.Lucas had chosen and idea that was surprisingly manageable for a small team to get done in a limited amount of time. It had hard surface objects flying around in a sparse environment with only one character seen form the waist up. All in all the only scary thing about it was the the interaction with the clouds… that was a bit of a gamble and required a specialist to come on board to make sure we addressed that. But otherwise it was a smart choice for a small team.
So Lucas began the process of planning the production, picking up an animator we’d worked with in New York along the way. As it turned out that animator wasn’t going to be available. Since most people in this business are working on last minute bookings it can be very tricky to plan any trips, so it wasn’t a great surprise. But we were able to get Henning Koczy instead, a great animator I’d worked with for a few months on a previous project. He almost certainly had to sacrifice a few paid bookings to do the project but didn’t we all?
So the production started to build momentum and I was still in the loop to some extent, cheering from the side-lines. To my surprise, along the way I found myself with time in my schedule as business slowed down in New York. I had a few things I could have done with my time but I knew this opportunity wasn’t going to present itself again and couldn’t be passed up. I contacted Lucas and begged on my hands and knees to boot someone off the team and take me! Ok, it wasn’t that dramatic. There was one official space left on the crew, he needed someone to act as a documentary filmmaker to shoot all the behind the scenes footage. That was the cover story anyway, and he could use me in other ways as well. 😛

I missed most of the design process, which I was bummed about as I’d have loved to do some concept work. I did actually do a few plane and net designs. I even did a load of hair designs for the lead character and offered a few notes on the her model but the main design period had passed so it was onto the animatic next.

I made a start storyboarding a few things and timing them out in an edit. Lucas was already doing a few rough shots in 3D, but coming from a 2D background I knew I was going to get more ideas down quicker in sketches. I did a few flight shots in storyboard form, but ultimately came to the conclusion that it was best to focus on the character shots. 3D is great for blocking out the action scenes with planes, but there’s no short hand for roughing out character performances better than storyboarding. So I jumped from one character shot to the next, skipping most of the exterior shots outside the cockpit. 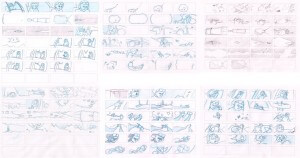 The 3D was actually being done in Softimage XSI as that has been Lucas’s main package over the years. I was incredibly lucky to work for Animal Logic on the first Happy Feet and I was trained in XSI on company time by some really good mentors. Later I used XSI again for a number of projects at Passion Pictures and Glassworks in London. So I knew enough to help out in certain areas. But still, that only adds up to a couple of years experience relative to over a decade of Maya use, so I wasn’t able to bring my full skill-set to the project, which was a minor frustration for me. As it turned out two other teammates didn’t know XSI at all so they had to learn from scratch, and suddenly I didn’t feel so bad. Initially though I waited to refresh my skills in XSI and focused on drawing storyboards ahead of our trip to Belize.
Yes… I just said, Belize… if you missed that little detail, it’s time to watch the intro video above. But essentially Lucas and his wife Christina Martell (taking on the role of Co-Producer and Event Planner) took on all the heavy lifting to make the trip to Belize as easy as possible. They made sure to cover every eventuality. Not least of which, I’m British, and that comes with additional complications when travelling in and out of the US. I actually discovered I had to have six months left on my passport in order to return to the country after the trip and my passport didn’t have that much left on it so I suddenly had to rush a new British passport from the States. It was close but I got it back in time and everything was in place.

Lucas (normally based out of Austin) finished his project in New York a number of months ahead of mine, but he took a couple of weeks before the trip to Belize to come back to New York and we brainstormed the early stages of the film. He worked on 3D elements and monitored the team members working on building assets while I story-boarded. This was also the first time we had to really knock out the film-making essentials and anticipate any problems. It was a great warm up session for what was to come.
Here’s Part 2… Also check out the campaign which includes other videos about the project. Please feel free to share the story.

Michael Cawood is a multi-award winning British Animated Filmmaker with a broad skill set. Having worked in animation since 1994, he's created Films, Commercials, Games, Short Films and Animated Series.
The Ocean Maker – The Insider Story – Part 2
The Devils Team – Where did they go from here?