The right time to get story feedback

Michael CawoodJuly 29, 2012in 5) Animation, feedback, filmmaking, friends, notes, screenwriting, short film, story
There’s mixed stories about when you should get feedback on your ideas. In animation it’s common for people to say that you should get feedback early and often but I’d argue that’s not always true. If you do that you risk ‘too many cooks’ and you can water down the elements that would make the film what it needs to be to make it resonate with a targeted audience. Better instead to protect the idea, and explore it fully for as long as you can, taking breaks so that you come back to it fresh and with other perspectives filtered through you. Only when you’re returning to it repeatedly from a fresh perspective and you feel it’s gone as far as it can, is it time to get feedback.

At this point it’s time to ask yourself if you have surrounded yourself with the kind of people that can give you valuable, constructive feedback. Whether you recognise it or not, your idea is still fragile and undeveloped and other people will see it. You need to be sure that the next person that sees it understands the fragile nature of an early idea and that they can both approach your request for feedback with the appropriate level of care, while still seeing the big picture and guiding you to a better place.
When I started making Devil’s Angels & Dating I wanted nothing more than to share my idea with other creative’s around me to get notes. But looking back now I realise I was seeking a partner that could fill the gaps in my knowledge, bringing the project up to a higher level without necessarily putting in the work myself. It wasn’t that I was lazy. I was trying to do so many different things to get the film made on top of having a life and a full time job. I accepted that I didn’t know everything and I wanted to find a partner that would compliment my skills and bring the project up to the standards I held myself to in all other areas of the project. That sort of person is very hard to come by, and even when I recognised the same spirit in other filmmakers, writers and artists there was frequently a friction of egos. Anyone thattalented doesn’t easily commit themselves to an idea that’s not their own. So my pursuit of a partner turned more into an opportunity to share filmmaking lessons that informed the way I handled the making of my own film.
But still I didn’t have the fresh eyes that were going to help me refine a masterful script. From an early stage I gave it to other writers, writer’s muses, artists, family members, friends, etc… and in the process of putting the making of the film online even opened it up to strangers to comment on my story. Some of the people I would have expected the best notes from gave me off target notes like screenwriting formatting tips which was a bit disappointing. Some of the best notes came from non writers, some notes came not from what they said but by identifying what it was they saw in it that I couldn’t have expected. Usually the best notes are what you interpret from their reaction, not the specifics of what they think the solutions should be.

I did manage to use some of the notes I got to steer the film towards a better version but I also had too many notes from the wrong people too early and (combined with my own insecurities at the time) it watered down the story and the themes I was passionate about. This is a question of being strong as a creator, making good choices and hand picking that best notes without losing sight of what’s important to the project for you. Isolated from much of a support system it was easy for me to find myself catering to peer pressure from strangers who’s opinions I shouldn’t perhaps have put so much stock in. After all they didn’t really see, understand or have faith in what I was really trying to do. So I look back now and I know it’s not a pure as I wanted it to be. An easy indictor of this is that the film is laden with props designed to serve one purpose or another and I’ve always hated films that put so much emphasis on the importance of magic borbals! The Indiana Jones films are the only ones I let get away with it, primarily because those items tie directly into stories I grew up with… but generally I prefer characters and situations to drive the narrative over props.
Over time I did find some good people to give me notes, and they gave great stuff. Usually not at length, but just enough to steer me in a new direction that would enhance the film, and usually that’s all you really want. A total re-write or re-conceiving the idea can be completely destructive to the creative flow of a project, but a firm guidance in a positive new directions can be very helpful.
The irony is that most of the best notes came well after I’d already gone too far to turn things around. Mostly after assets were made, animation had started, and the team was well under way. Since this was a project with no budget and only the services of volunteers bringing it to life, I had to be respectful about just how much I changed. It was only when the project had a following, some recognition and more than enough material to show that the people with the notes that could have made a difference took the time to make themselves heard. I knew that would happen to some degree and that’s why I persevered towards getting it made even without strong feedback, as you can’t attract talent until you’ve proved you’re not wasting their time. Now I would argue that I’ve made my mark as a filmmaker to some degree and I do know people that would give me gold if I needed feedback. But it’s taken a herculean effort to get here including moving and changing jobs numerous times, being open to new experiences and points of view. 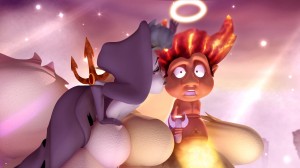 So what tips can I share with you?
1) Surround yourself with good people… and if you can’t find them, seek them out. It may require picking up your life and going elsewhere, certainly in the early stages. You’re going to have to earn the respect of those people too.
2) Choose the right time to get feedback… too early and you water down the story’s voice, too late and it’s damaging to your creative flow to change it.
3) One last tip; recognise what you want to get out of the feedback. Ask specific questions to guide them to give you the level of feedback you’re looking for and get them started. Don’t present them with a blank page and a “What do you think?” That’s the same as asking someone for hours of their time and they have to believe that they can help you in a meaningful way in a matter of minutes (unless they are a really good friend).
40.6681669-73.9800645

Michael Cawood is a multi-award winning British Animated Filmmaker with a broad skill set. Having worked in animation since 1994, he's created Films, Commercials, Games, Short Films and Animated Series.
The Layout Sandwich
The Origins of a Man on a Mission