Michael Cawood March 10, 2013 in bird, cute, games animation, microsoft, rare, robin, squash and stretch, viva pinata
Way back in 2006 I spent six weeks helping out the animation crew working on Viva Pinata for the XBox 360. We were cast to different characters and I was animating the Robin. For some reason I never got around to putting any of this online, but it’s so cute I thought I’d put it out there. It’s the kind of stuff I would have put in my reel a while back but unfortunately there’s a bit of a bias against games animation (and unrendered shots) when you’re applying for non-games work, so I dropped all my games work from my main reel years ago. It’s a shame really… good animation is good animation, but unfortunately I’ve noticed you get more credit for sloppy animation rendered impressively. It’s not as bad as it was, I’ve definitely seen more acceptance of games work as valid animation in recent years, but it really depends who’s looking. Some people from Film and TV are still frequently quite biased against it and they close themselves off to talent without judging the animation on it’s own terms in many cases. I’ve noticed many games animators render their in-game animations now and find ways to blend them together to make them more presentable which is a nice touch, but it’s a lot of extra work and usually involves working outside of office hours to make that happen. It’s not ideal. It’s like a whole extra layer of administration for everything you work on. 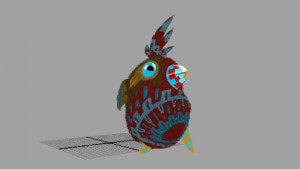 Anyway here’s a montage of a few of the animations for the Robin and here’s a little write up about the project in my portfolio.

Michael Cawood is a multi-award winning British Animated Filmmaker with a broad skill set. Having worked in animation since 1994, he's created Films, Commercials, Games, Short Films and Animated Series.
The Devils Team – Where did they go from here?
Storyboards and Animatics