Continuing on from the last Production Tip blog about Tracking Production…

The Recruiting Database
This might seem creepy but I kept a spreadsheet with some basic information on everyone on the team… or anyone interested in joining the team. The key thing I used this for was to remember their strengths, up to years after I last had any contact with them. We had over 400 volunteers sign up and many more that I spoke to outside of our development site. It could get very difficult for me to remember every encounter, especially since most were only over email. I tended to remember shots in reels better than the specifics about my conversations with each artist. Some would be people that left the project and rejoined a year later, and it was key to remember their strengths and weaknesses. 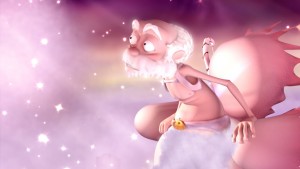 I would score them in a few very important areas:

Talent (0 to 4) – The quality of their reel, this would be updated with each encounter and if their work on the film differed from the work in their reel.

Communication (0 to 3) – Their communication skills including written English and responsiveness. A world wide project can have some severe problems with basic languages. I don’t speak anything other than English, so it was key that everyone on the team could both read and write really clearly in English in order to avoid hitting any brick walls. Equally the best written English in the world does no-one any favors if they don’t answer their messages. Not replying is the same as not turning up to work in the virtual studio model!

Signed Up? (0 to 1) – Were they signed up on the development site? It was a sign of commitment and an openness to working in the pipeline we’d built. If they weren’t willing to sign up then it was always a good sign that they were going to require extra effort on the part of the team to integrate them, and it usually wasn’t worth it.

Score – This was a simple formula that multiplied up the scores above to give an overall rating. Then by ordering the spreadsheet by this number you could quickly see the best team members and candidates rising to the top.

Assigned – This simply kept tabs on whether they were currently assigned to something. It could take some people quite a while to complete a task and it was useful to have a quick look-up in the spreadsheet to see where things were getting stuck, or people were being left waiting for assignments.

The recruiting database is one of the few documents I didn’t share with anyone. It’s a very personal interpretation and could easily offend. But it was incredibly useful for me to head off any poor assignment choices, since I didn’t really know most of the people working on the film (as I’d never met them in person). It was mostly animators as that was by far the largest area we got volunteers and required the most filtering (over 340 candidates). I imagine that similar databases exist in all the major studios, and the recruiters no doubt rely on them for every interaction. With any luck they’re more sophisticated than my spreadsheet. The scary part is that recruiters move around between studios all the time so the data going into such a database isn’t going to be consistent… food for though!