Michael Cawood November 13, 2013 in 5) Animation, animated feature, animated musical, Disney, disney princesses, Film, Frozen, love in the time of advertising, Musical, song
Frozen comes out soon and with it, I think, a reboot for Musicals. I liked Tangled a lot but the songs in Frozen are, to my taste, much stronger. Growing up with Aladdin and The Lion King… animated musicals have a lot to live up to with me, but I think Frozen was definitely a step in the right direction and it’s comparable with Beauty and the Beast. I love animated musicals… not for every single animated feature, it’s great to have seen the medium pull away enough to try other things, but there’s plenty of room to go either way now that we’ve cleansed the pallet for a few years, if they’re done properly. (Actually there’s even room to diversify further in animation but that’s a different blog post.) 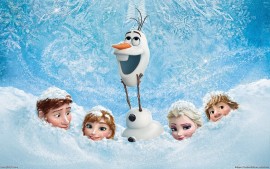