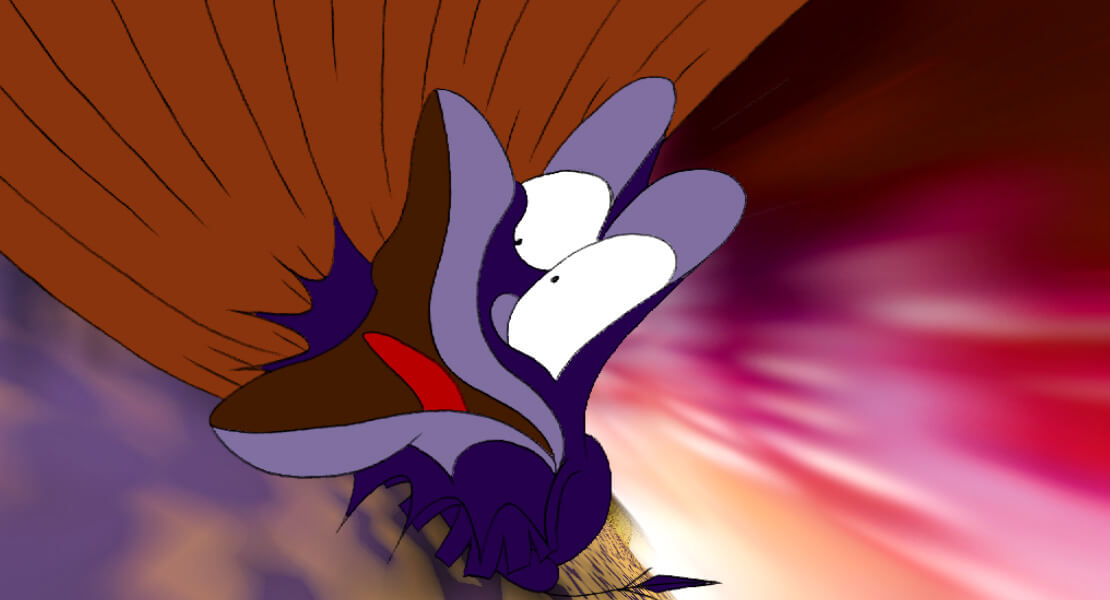 This started with a mythical legend I researched that I have completely forgotten now. My old friend Scott helped me find it, he's good with things like that. The legend formed the basis for the story and provided the name of the beast: Fenrir. The I didn't make any attempt to retell the legend, I just borrowed the idea for the characters and formed my own story from them in a similar setting. My plan for this was ambitious so I never actually managed to completely finish it. Some of the scenes are lacking a little finish in the animation and a lot were left without clean up or colour. Until my work on Starfox this was the longest project I'd ever worked on, at a full year and a half of development.

The storyboarding was interesting. I just drew layouts of scenes I wanted to bring to the screen at any size and at any level of detail then later strung them together by laying out all the pieces of paper on the floor in order, occasionally switching them around in a crude form of editing. I then drew more images to span the gaps and flesh out the storyboard. Later I scanned all the images into the computer and flipped, rotated and scaled them to achieve the best results in a timeline that formed the animatic. I remember having to take a heavy hatchet to it in order to appease my tutors Chris and Pete, and make it a bit more manageable. Of course I was planning to get a job after my degree so there were key scenes that I wanted included in order to flesh out my showreel with something meaty. Hence my attempts to get flying, squash and stretch, walking, dialogue, facial performances, animal mannerisms, effects and much more into the film. It was certainly ambitious at the time.

I designed all the characters, but now look back with some regret. I'd wanted the beast (Fenrir) to be more athletic and less weighty, but otherwise I liked his streamlined head. The double jointed legs were probably a little over my head though at the time and I'm not completely happy with his walk. I ended up having to cut several of the wide shots to save time which means you don't get to see much of him in full figure anyway. The Raven I was very pleased with and I did my research at a local bird specialist zoo for that one. Tabby was easy since I'd done loads of cat life drawing before this project, but I realised afterwards just how close his design was to Oliver from Disney's 'Oliver and Company'. Not intentional I can assure you. The Pagan was my attempt to do a human character way before I was ready to animate humans. So I covered him in a big brown cape-like costume. In hindsight I should have dropped the horns too, it wasn't that they were hard to draw from all angles (I made sure of that) but he just looked better in my earlier designs without them. I guess I was just trying to give him a gimmick to make his intensions more obvious. There are more details about their designs in the gallery.

I started on the animation and it was definitely a trial by fire. I'm still relatively pleased with a few of the scenes though. By this point I was beginning to make a very conscious attempt to do a good quality line with variation in it's thickness in all the right places for the clean up, but most of my hard work was butchered by the DOS based 256 colour animation software, which had to have absolute black and white edges to the characters to make the compositing work. After building the set and texturing the environment to handle most situations (3D Studio 4 in DOS) I roped in one of my fellow students, Chris, on the computer part of my course to top off the mountain with snow. From there I composited the animation onto renders of the background and added shadows and effects where I could. One or two of the scenes got finished after the deadline in another animation program while I was working on the demo for 'Archer', it was one way to get a little more variety in the demonstration. The film was sent off for judging unfinished, ready for the final year show at the Glammies, but it still managed to get me an award for best second year film (I've forgotten which animation company judged that category that year).

As soon as it was over I started working on a couple of new characters that latter became Racket and Polo.