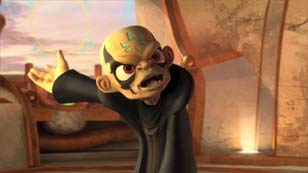 After the release of my short film 'Devils, Angels and Dating' I was just putting my name out there as a potential Animation Director when I came across this unique opportunity in New York. Panda Panther was recruiting for animators for their next big Skylanders job. After a conversation with the Directors it was clear there was a good opportunity here for me to help them at a high level and I was hired as an Animation Director. There were a few related projects around the franchise and the first was a number of cinematic sequences for the XBox 360, PS3 and Wii games due out before Christmas. I took a lead role alongside a good number of other talented leads, heading up two of the twelve sequences, or FMVs as they were referred to (Full Motion Video).

Actually I was initially scheduled to work on three of them, but since we had about eleven leads and some of them didn't have sequences that were ready to start yet I handed off one of mine so that we could all get going. Later I took over other lead's sections to finish them off so it all balances out in the end.

The first big task became clear immediately, we needed characters to animate as we had a huge animation crew at a very early stage. Storyboards were already largely done and previs had to get started. On paper the characters were meant to already be rigged and ready to animate but what we were given by the client were in-game assets, low resolution and rigged only for the basic functionality expected of a real-time game character. Modellers were already diving into higher resolution revisions of the geometry but the rigs needed a lot of work. Unfortunatley we didn't really have much rigging time built into the schedule. Looking at the main hero rigs quickly revealed they really needed a complete re-rig. I wanted to use the same auto-rigging techniques I'd done on Devils, to keep the rigs consistent and highly featured. That would have given us everything we needed faster than manaully making fixes to existing rigs, but it was only day two of my new job and it was clear that was going to be a hard sell. So we proceeded with the manual route. The trouble is, that comes with weeks of animator testing, rigger time, retesting and re-animating (as the animators have to start working on something... then the rigs change). It's not ideal, and it inevitably added to the schedule, but it was worth it as the rigs got better and it made them much more featured, less buggy and faster to work with. This was a project that would last months so the time savings paid off in the end. Not all the characters got the same level of love and attention but we managed to get it all done with what we had.

Next was the epic previs stage. We were calling it "Previs" but in reality we were doing layout and animation blocking as well for multiple rounds of feedback. This was by far one of the longest gestation periods. There were a number of directors and clients to please, many of whom had filmmaking backgrounds too so we had a lot of feedback and plenty of people to please. It worked out fine but we did end up with a rather crushed animation schedule as we'd spent so much time revising the cameras and staging. Along the way I had the pleasure of working with Third Floor who helped us bash out some of the more complex shots for a few weeks. I was the point man with them co-ordinating the flow of notes and shots in and out of our pipeline. Ultimately though most of the shots were setup by our team of eleven leads, each with varying histories of film, TV, games and commercials work under their belts from all over the country. It was a fascinating melting pot of people to talk to and swap stories with, and we all made a lot of firm friendships over the course of the project.

Previs was already including animation blocking so we effectively transisitoned into the animation period of production but the fire was already lit underneath us and our crew had to knock out a lof of material in not a lot of time. I think the final amount of footage was somewhere around 22 to 25 minutes (plus trailers, more on that later). On top of this there were mini character intros being animated for the huge number of characters in the game. So it was a bit crazy for a while, and it was decided we'd reach out to a couple of remote animation studios in India to get more work done faster and cheaper. It's debatable how successful this was for the main cinematics as we didn't have a relationship with those studios yet and there were a lot of bugs to work out of the system. Ultimately it was decided that our on-site animators would block in the performances, and hand off to India the rest of the shot for what was being called 'smoothing', in other words in-betweening or 'splining'. Blocking is a highly creative process and takes up a significant amount of time and creative input so they wanted to keep that in-house to reduce creative mis-communication. While splining is considered pretty straight forward... you just press a few buttons and clean things up... right? Well, honestly, every animator knows just how much work it takes to go from blocking to final polish and it's still a very large portion of the total creative workload, so rushing it wasn't working out quite as planned. Inevitably shots had to be polished up in-house again. This isn't my first time working with outsource studios, so I knew this would happen but there was an infectious enthusiasm for positivity that was hard to fight and we dove in with our fingers crossed. It's not the fault of the studios in India, but these sort of work flows need mature relationships and well thought out pipelines. Seperating blocking from splining can work in some specific cases, but for the quality and speed we were aiming for it wasn't very effective. The worst part is that neither the animators in India or New York felt like they could take ownership of their shot so neither one did their best work at all times. Ultimately as the producers realised it wasn't working quite as promiced we started to send less and less shots abroad, and the task of animating got simpler. To the producers' credit, many of them were very experienced in the world of commercials and live action, but they were learning all about game cinematics and animation on this project. Ultimately though we were all on the same side and they did a great job of adapting and pushing us to get great work done.

At this point our crew was huge, maybe 30 or so animators in-house? I forget now. Plus all the other departments (a total of about 65 onsite), several offsite studios working for us and finally we had a band of remote animators working from homes all over the US, and even a few outside the US. Some had worked with Panda Panther before, many others came onboard as they'd been so effective working remotely with me on my short film. This group of people wasn't as much of a problem as the offsite animation studios, because they had a direct line to the leads in-house and there were fewer communication barriers. But still it can be tricky feeding remote animators with solid chunks of animation all setup and ready to go with clear guidance and bug-free rigs. I had a few remote people working with me on and off over the course of the production while some were managed by other leads. I'd have liked it if we had a better system for getting them files and feedback though, as it became quite time consuming keeping ahead of them. It was great to be able to work with them, but I can't imagine what it must have been like for them on the outside, looking in, wondering how to interpret all the craziness. It must have required a lot of patience. I did my best, though, to give them face to face time over Skype and a little tour of the studio so that they could understand a little of the madness.

Ultimately, as with so many projects I get involved with, I wish I could have been there earlier. That's just how it works out, though, I had to finish up my obligations to my previous employer and travel to New York and by the time I was starting so were a large number of animators at multiple levels of experience. I regret not being there early enough to help with storyboards, editing and character rigs. One thing I will say is that there was already a very solid set of Maya pipeline tools in place thanks to our Lead TD, Adam. They were really impressive, and they continued to evolve during production but the starting point was really solid. Likewise we all had excellent computers and everything installed on day one (that almost never happens). The office space was nice (for a city basement) and the atmosphere was generally really exciting to be a part of. Despite the problems we faced I'm really proud of the crew and the results look largely pretty impressive. Something to bear in mind is that although the leads may have come from all over the place, most of the crew were part of the local New York talent pool, many of them juniors, and they don't often get to work on cartoony CG character animated projects on this scale. So they were all putting in 110%, and putting in a lot of passion to make up for any lack of experience. It was a unique bonding experience and even after the crew had disbanded it made a big impact on the local talent pool.

But that wasn't the end of our adventures in the Skylanders universe, next came the Stereoscopic 3DS game.