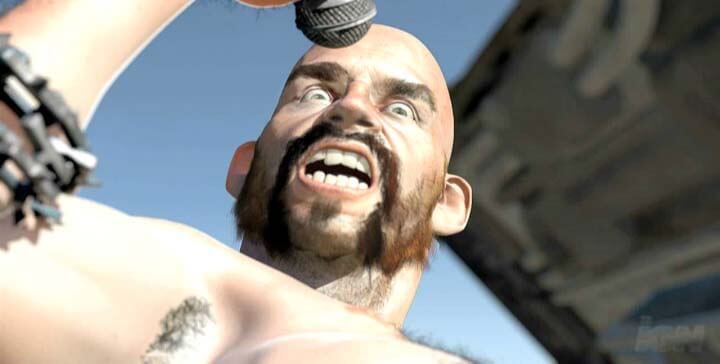 I started at Passion Pictures and I was working on a really cool project which gave me plenty of room to flex my film making and animation skills. I'm a huge fan of the various styles of Passion Pictures' portfolio and a few of my friends from MPC made the move too for various other projects, so it was fun.

The first Harmonix: Rock Band cinematic was very cool and it presented a high bar to rise to. I arrived on the sequel before it was really all planned out and dived into the Previs while I refreshed my knowledge of XSI. Unfortunately I was pretty much the only person on the job for the first week so it was certainly challenging figuring out how to proceed with only a loose animatic in place. I gradually replaced shots in the time line with rough versions of the shots.

Week two saw the arrival of my friend Guillaume who I knew from MPC. He made an incredible start learning XSI from scratch as we continued to fill in shots. As each week progressed more and more people switched to the project and we filled out the previs timeline. Unfortunately it became clear we’d also be bug testing the rigs, as there were a lot of issues to iron out and the modelling and rigging was taking place at the same time as the previs and eventually the animation too. We managed though and despite a few sacrifices the rigs were pretty good, although looking back I’d rather have dived head first into bug testing those rigs before we did previs as we continued to live with some rather irritating flaws.

This was a mocap based project so the previs had to guide the actors. The trouble was the schedule was tight so the mocap shoot had to happen early which means not all the decisions had been made yet. Most of the mocap came pretty close to a good starting point, but it’s not surprising that the ambitious physicality of the shots meant that a very large number of the hero shots had to be hand animated. We’d put the mocap in and get it as close to the right timing as possible along with a reasonable approximation of the camera, then we’d start reworking it all. Eventually most of the mocap in a lot of the shots was almost all gone, and the changes in the performance meant that the camera had to changed a lot too. In fact the camera turned out to be one of the things we spent the most time on.

I was very happy to be assigned some of the most interesting and challenging shots. They involved the whole section where the Heavy Rock Band singer was water skiing alongside the side-wheelieing car. It sounds crazy just writing it, which is why it was going to be so much fun. It started with mocap in place which gave me a good foundation, but to make it all convincing I eventually replaced it all with hand animation. I had to take into account the chain’s tension, the car moving across the road and how that would affect the singer being dragged along. There was a cliff edge to deal with, bumps in the road and his performance as a singer... all very interesting stuff.

Somewhere along the line the mocap for the face arrived and I got most of it as there weren’t many close ups in the timeline other than the shots I had, so it became really important to get the camera right to make it look good. There were still some problems with the facial mocap so I had to refine those to really nail the lipsync and avoid intersections. But I had a choice of two lots of head orientation animation, one from each type of mocap. There was some interesting stuff in there but unfortunately very little of it was in time to the musical cues, so I did a lot of it again from scratch. I was very eager to get to the point where I could animate the head because head moves to audio cues are one of the easiest things you can do to really sell the connection between sound and performance, and the appeal of the shots went up 200% once it was in there.

I had another shot to do for the teaser (which doesn’t appear in the final cinematic) that proved to be a real pain.

In the end, despite far too much time dealing with technical issues, I was proud of the shots I produced. It looks good, and will provide plenty of cool shots to use in commercials.