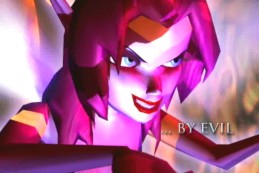 Not quite as powerful as the X03 teaser trailer, this version actually had an early version completely done before we looked at it and decided to completely re-plan it. There were certain points we wanted to get across that we needed to highlight. One of those elements was the ability to tackle any given situation in a number of different ways by choosing any one of a number of characters. So Kameo runs into an encounter with some trolls and begins to take them on with one character, then the scene freezes, the screen splits and we see her approach again with another character and another attack move. Then it splits again and again, ultimately showing four methods of dealing with these trolls before all four views continue to play on with four different results. The split screen works reasonably well, but some of the soft edged overlays (used later) get a little confusing and unfocused. I was quite pleased with the slow-mo tree boss as the camera swings around him then he goes back into normal speed and smashes down his roots just in time to hit a queue in the music. I did a mock-up of some cool text sweeping around the arena with the rotation of the camera and it looked really good, but I was out voted! I added a little movement to the Kameo logo at the end that gave it an interesting organic quality because you can't quite put your finger on how it's moving ... it just is.