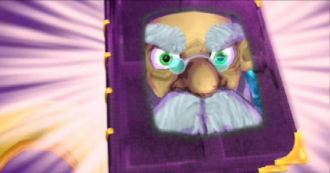 This deleted sequence started life like most of the others as an animatic. But at this stage storyboards and animatics were fairly new to the team and they liked them so much they thought we didn't really need to do any animation. This wasn't initially a popular decision with the animators but at least it gave me some time to experiment with visual techniques that could be applied to 'excuse' the story book style of visuals. But once the first evolve scenes started to be done in full animation it was clear that it all should be. Some people thought it would save us time and money to make all the cut-scenes in this glorified storyboard form, but in reality you still had to pose, light and render the scenes so it wasn't saving much time. Adding the animation just brought an appropriate amount of polish without taking significantly longer. Never the less this sequence sat in the game for a while during development and it was earmarked for an update along with the rest of them. But what most people didn't realise was that an update for this scene would have been like starting from scratch and wouldn't have been an update at all. It wasn't a very interesting scene anyway and I convinced the director to drop it in favour of spending more time on other scenes.