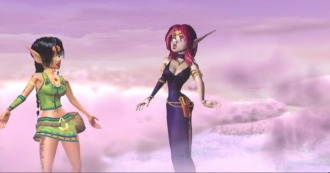 This is my personal favourite Kameo trailer up to this point. I've done a number of these and this is the one where everything just came together to form something beautiful (well I think so, judge for yourself). I found myself with a one month deadline to pull something really special together. We worked on a plan and it started with an ambitious opening sequence that hinted at some of the key points in the game's story. Everyone else set off to make sure that the footage was going to be available to fill out the rest of the timeline, while I ploughed into the cloud sequence that constitutes the first thirty seconds. I had to learn some new tricks and pull a few seven day weeks, but I was very pleased with the results. The score was specially made to fit the editing plan which was all blocked in with temporary black and white timing cards, that were later replaced with the final in-game footage. As usual I spent a couple of days capturing the footage with the help of a professional player (I'm Ok, but no-one likes to watch someone that doesn't know what they're doing!). And I edited the whole thing together in the last weekend. Monday morning came and the response from the team and the rest of the company made it all worthwhile. It premiered at Microsoft's X03 show (2003), and did the rounds on the company websites for all the eager punters waiting to get their latest fix.