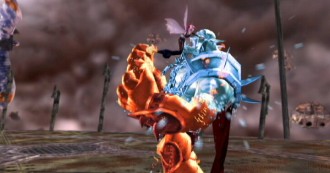 The magnum-opus of the entire game. This huge sequence had to top everything you'd seen, push the capabilities of Kameo beyond what you'd previously experienced, draw together numerous story threads, introduce a twist in the plot and give the player a satisfactory ending. It was created towards the end of the game's development so it was under pressure to be completed fast and there were other less important scenes that suffered in order to make it all that it could be... but it was worth it. My biggest regret though was that the musical score didn't live up to the same standards and robs the visuals of their intended impact during some scenes. Unfortunately everyone was under pressure and running out of time. In many ways I wish we'd have used the temp track as it matched the grandeur much better. You can see the sequence in mid-development below with a mixture of pre-visualisation, unfinished animation and storyboards.