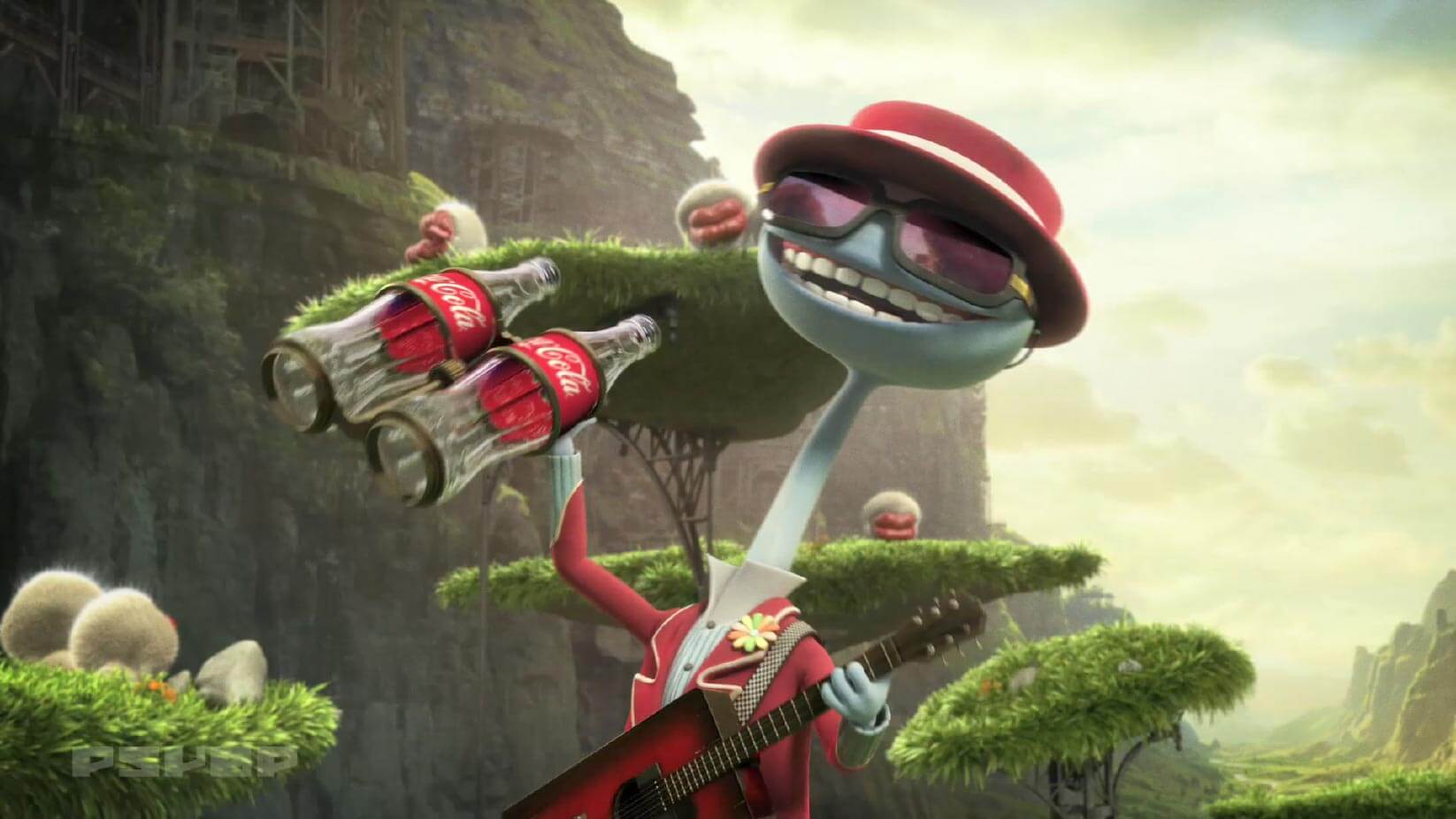 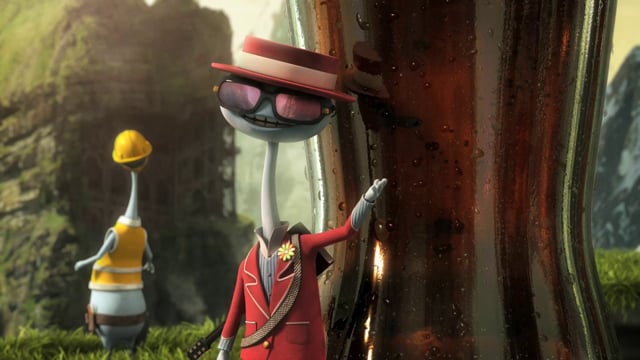 After spending a couple of years working on confidential projects it’s refreshing to have worked on something I can talk about again. I’m writing this after returning to Austin, after spending a couple of months in Los Angeles. I got the call to work at Psyop and when I found it was going to be on a Happiness Factory project I couldn’t have been… happier. Ironically another job option came up at the same time (why do they always come along at the same time?). Anyway, this was the best fit and I pulled out all the stops to get to LA to work on it.

It wasn’t easy, it cost me a fortune and I had to leave my girlfriend behind in Austin as she had a full time job there. Finding a place to stay in LA without paying too much wasn’t easy either, and it turned out that booking something early is pointless as they will just find someone who can move in before you, so you have to wait until the last minute. Then the challenge is, can you trust the place, is it safe? I was bringing computers and my car. Ultimately I got lucky and on the afternoon before heading off, a friend of a friend offered their place. The rent was reasonable, the basics were covered and it was with someone I could trust. Perfect.

I had to have a car in LA and I needed my computers and various other basics so it was clear I’d have to drive there. It takes two days, or two 12 hour sessions, to drive to LA. It’s slightly further than half way across the country as its much further north of Austin. My friend, Lucas, offered to drive out with me so that made the trip much easier and more fun, as we chatted and swapped shifts along the way.

I started my first day at Psyop and got to see the story reel, it was amazing. The whole thing was already watchable, fully laid out and even included some pretty decent animation blocking in many cases. It was a dream to land on a project already so well developed. I’m used to having to animate while the director is still deciding what he wants. This meant that we could afford to spend our time on strong animation rather than iterations. Of course it’s never that perfect and things did change but for the most part it was ready to animate and the changes were very minor.

One thing that was perhaps a bit of an oversight was that it was expected that we could get away with using rigs from previous Happiness Factory projects. They did work, but they weren’t up to spec relative to the rigs most animators are used to working with at the time and they lacked a few basics here and there. They weren’t big fixes, but suddenly we had a large crew of animators a few weeks into shots when fixes were arriving and that inevitably led to time spent re-animating things. We probably should have spent some time rigorously testing the rigs for a while first and gotten the fixes out of the way. But that’s the nature of production and it’s rare a schedule anticipates that up front. Ultimately though, they were still stronger rigs than many other productions I’ve worked on.

My first batch of shots featured the main hero character, Pete, in a number of close ups and mid shots. I was over the moon, and once we got started there was a refreshing focus on animation quality. I didn’t really know the style they were aiming for at first so I must admit my initial shots were a little off target stylistically. It wouldn’t have been an issue but my shots were pretty quick to get done so they hit a high level of polish before most of the other animators had anything to show yet. It turns out that there was a previous project that many of the other animators had worked together on and there was an unwritten rule that that was the style they were aiming for, so some of the newbie’s, including myself, wavered around a little at first to find the right style. It was actually a very cartoony, snappy style. Even more so than previous Happiness Factory spots, but something I was very pleased to have a go at. It was refreshing as it was the kind of work I’ve wanted to do more of but never had the chance to.

I got to have some fun with some Penguins throwing snowballs at each other like it was a baseball game (strangely the final film was missing the snowball), but background character animation is somehow far less rewarding when it’s not on your own shots as you know you’re never going to be able to claim 100% of the creative input on that shot. I’ve done background characters at other companies where that was all I worked on so you accept that’s what you will focus on, but in this case I was hoping to get more hero animation. I did my best to put that out of my mind and actually had a lot of fun on some of it. The key was to plan something that wouldn’t distract from the foreground characters, then when you’re on track treat it like its own little mini scene and ignore the foreground characters... that way their performances can be just as strong. Yes you won’t see all the work, but the result will be stronger and you’ll enjoy the work more than if you focus only on what you can see.

Eventaully we ran out of hero shots that were setup and ready to go. I was ahead of schedule and I had to wait for team members more familiar with the project pipeline to prepare shot files. But eventually I got one, two, three shots… it’s funny how a small assignment can expand! Animating one group of characters in one shot, leads to doing the same characters in the next shot, then all the other characters in both shots, then everything in all the shots in that area of the edit!

This turned out to be one of the few points in the edit that the client wanted a change from the layout. They wanted more of a performance from Wendy, which I was really happy about as I’d been dying to get my hands on a Wendy shot. She has this great snappy, craziness about her that was an almost complete opposite to Pete’s more laid back attitude. I had a lot of fun going crazy with her, and probably provided half a dozen distinct alternatives for review before they settled on one. Regrettably when I saw the final film they’d changed their minds again and my shot had been reworked again. The background characters were still all mine but I could no longer claim the shot for my reel. Client requests have to be addressed and if you’re not on a production to the end this sort of thing does happen. I knew it was possible but I had to move on and I couldn’t be in Los Angeles to the bitter end. I was just glad it landed in the hands of a strong animator who did it justice after me.

Psyop’s pipeline and tools were very similar to my own short, Devils Angels & Dating, so I was immediately very comfortable. Along the way I learned a lot of tricks, but what was particularly surprising was that many of the techniques they used were the same as those I had developed for Devils. It was quite validating, knowing that my choices were not wrong and in fact very close to optimal. I always make the effort to be very open minded when starting a new job as it’s a great way to learn new techniques, but as things went along I found quite a few things I was already doing better on my own short. This gave me the chance to help out here and there when problems came up, although I wish I’d been able to stay longer. It takes more than a few months to earn the trust that allows you to really make a difference in a new company and staying longer may have opened up my opportunities.

Ultimately my booking was coming to an end and the production was nearly there. I’d have liked to stay on to the end but life back in Austin was calling and the pressure was on to return. I got some great shots out of the project… but I have to say I saw some amazing animators at work there. We had some old school veterans join us by the end of the project, but initially it was carried by a crew of relatively new animators pulling together and doing a great job. I checked out some reels when I first got there, to see who I was working with, and you wouldn’t have necessarily known what everyone was capable of at first. But the Happiness Factory spots really bring the talent out to play, and all the animators have some great new work to add to their reels.

So I hopped in my car for the return journey, leaving a lot of new friends behind. It was slightly sad, but also happy to be going home. Little did I know at the time that it wouldn't be that long before I was making Los Angeles my home.

"Happiness Factory" is the Copyright © of The Coca Cola Company 2011