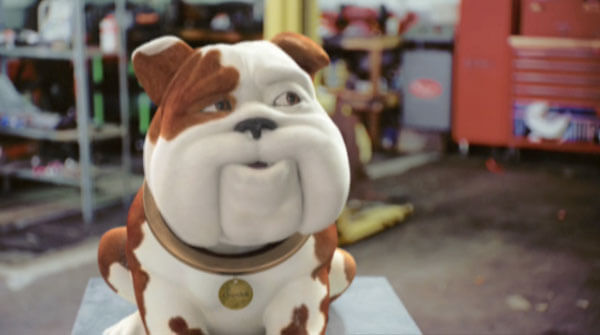 At a time when Glasswork's in-house animator was busy on another project, I was brought in as a Freelancer to handle half of the new batch of Churchill adverts. I  setup the shots and animated the Churchill dog for two adverts. There was actually a total of four to do but Alastair handled the other two.

Setting up the cameras to match the live action plate was a manual affair of lining things up crudely based on some rough numbers we had from the shoot. Not everything fit as it was supposed to though and it all had to be jiggled around to make it look right.

The Director wasn't onsite so we had to interpret the performances ourselves. We had some guide dialogue to start from but we knew it would change so it was a case of roughing out the performances knowing we'd be changing them later. Some shots I was fairly close, others went through lots of changes. Even over just two weeks the gags changed and so did the dialogue. Eventually we had the final audio and things started to slot in for most of the shots. It was quite satisfying to see it all come together so fast. It's only an animated head so it was very easy to make alternative versions. One shot wasn't really defined very well and had no specific lines of dialogue, and since it was the final 'product shot' it was obvious it was going to go through a lot of iterations. I must have done at least seven different takes and it still wasn't approved when the in-house animator became available and took over from me. It was Churchill's reaction to Roy Walker laughing at his own joke, and I tired everything from confusion, panic disguised by a smile, smiling and nodding, side-ways looks to the waiter, panicky looks around the restaurant and laughing with him to shaking his head at a poor joke he's heard too many times. You name it, I tried it. But in the version of the end shot the version that was used wasn't one of mine.

The second advert wasn't due to be shown for many months so it was more a case of getting something down that would be refined by someone else further down the line. I managed to almost finish it anyway with a first pass for every scene so that the director would have something to respond to, and build on. [Note: When I saw the final version most of my work was in tact baring a small change to the final shot... although you can never really tell just how much was changed so I can't take all the credit as I'm sure another animator spent some time polishing things after me]

The animation for Churchill was refreshingly simple and character based with very few technical hurdles. In fact the biggest challenge was simply that he's only a nodding head... you can't shrug his shoulders and you can't translate the head too much without revealing the gaping hole in his neck. It became an interesting challenge just to make him act. He also had to be kept 'on model'. We had a printed sheet of approved facial expressions to try to keep to and it was surprisingly easy to stray from that when you're trying to do things the character hasn't done before. Alastair was hotter on that than I was, having worked with the character before, and it took a few passes on some of the shots to iron out all the 'un-Churchill-like' poses. but we nailed it eventually, and got some nice little moments out of the old dog.