Alongside the art direction for this product demo commercial, I was working on the storyboards. This turned out to be the fun part.

I recently bought myself a secondhand Wacom Cintiq. It’s been on my wishlist for a decade, but they’ve been prohibitively expensive until recently. It’s also hard to justify a purchase of a grand or more for something you’re not sure you’ll use regularly. I’d walk up to them every time I saw one in person and doodle to see how good they’d gotten. Usually I was disappointed with the disconnect between the tip of the pen and the actual line being drawn.. i.e. the space between the surface and the screen, and the lag in the responsiveness. That hasn’t been entirely solved but it has gotten better as computers get faster and the screens get better. Recently tablets have become popular (finally!), and Wacom has made a stand alone tablet with their pen technology in it. This is essentially the device I’ve been dreaming of for my entire career (seriously? it took that long?), but still…. it’s too expensive. It has, however, had the effect of driving more second-hand units out on to the market. So for the first time I was able to get an older, desk-mounted, hard-wired Cintiq for a reasonable price. Hallelujah! 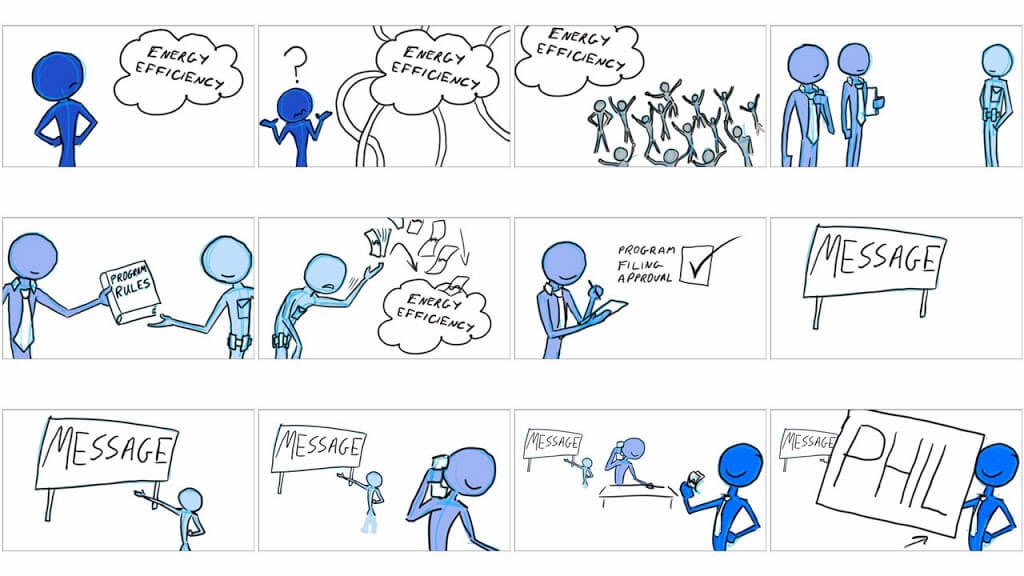 Drawing with a Cintiq is still a bit sloppy, relative to pencil and paper. I can’t see it taking over my character design work just yet. But where it excels is in story-boarding. Normally I storyboard on paper, on printed layouts (several frames per A4 page to save paper). The images have to be scanned in, labelled, filed and edited into an animatic. It can be a long turn around between drawing something and seeing it playing timed out on a screen. You also don’t have the benefits of undo, layers, copy and paste, and onion skinning (you can use a light box… but to save paper, my panels tend to be on the same page so that gets tricky). So there’s a mental hurdle that comes with that long turn around time and you don’t feel like you can afford the time to try as many options to really explore the idea. That means you’re not reaching the best results. Cut that all out and add the benefits I’ve already mentioned and things speed up to the point that experimenting isn’t as much of an issue… and it becomes much more fun! 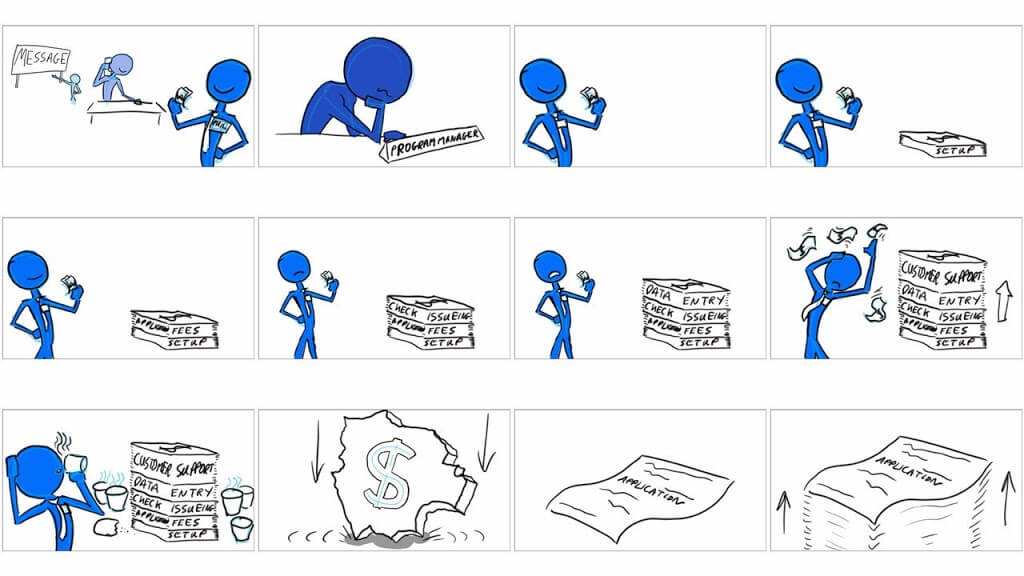 The biggest block still remaining is that I am using Windows 8 and there seems to be significant bugs in the implementation of pens in various programs. I had to use a wider variety of programs to draw each pass than I would have expected just because those bugs got in the way. I also had to keep toggling the settings for my Wacom and the Windows default method of handling a pen. But despite that it was worth it. Later, when I was switching to 3D and video editing I turned off the Cintiq screen and just used it as a standard Wacom tablet. 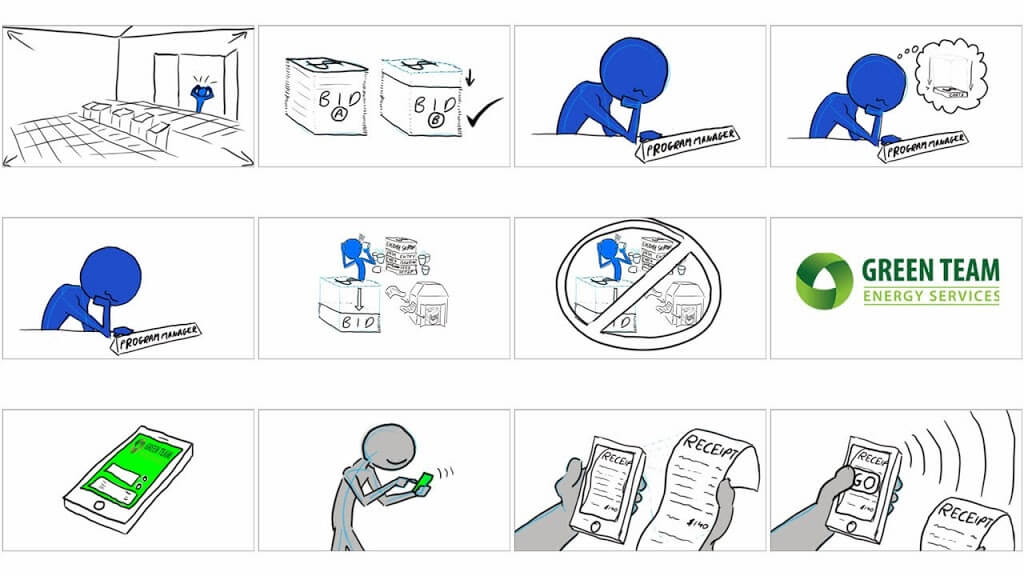 The client asked for a hero character named Phil, who would wear that name tag. As the story process evolved I created other characters to represent the client, the potential buyer, technical support and the users. In line with the art direction, they all had unique color palettes to differentiate them. 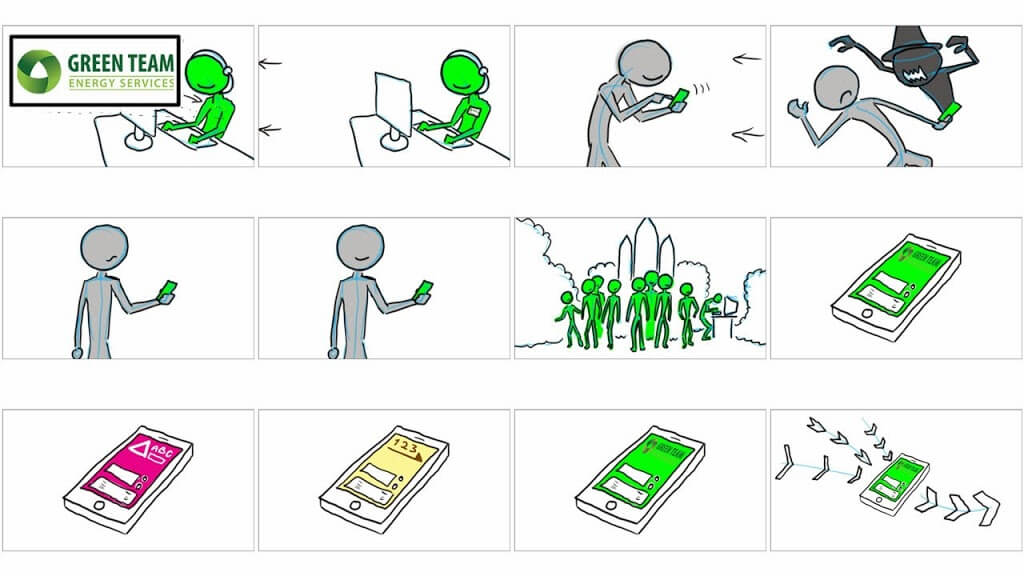 I knew I’d be cleaning up every character image I created in the boards so I had to be sparing with the quantity I created. But I could re-use poses and that would save time. 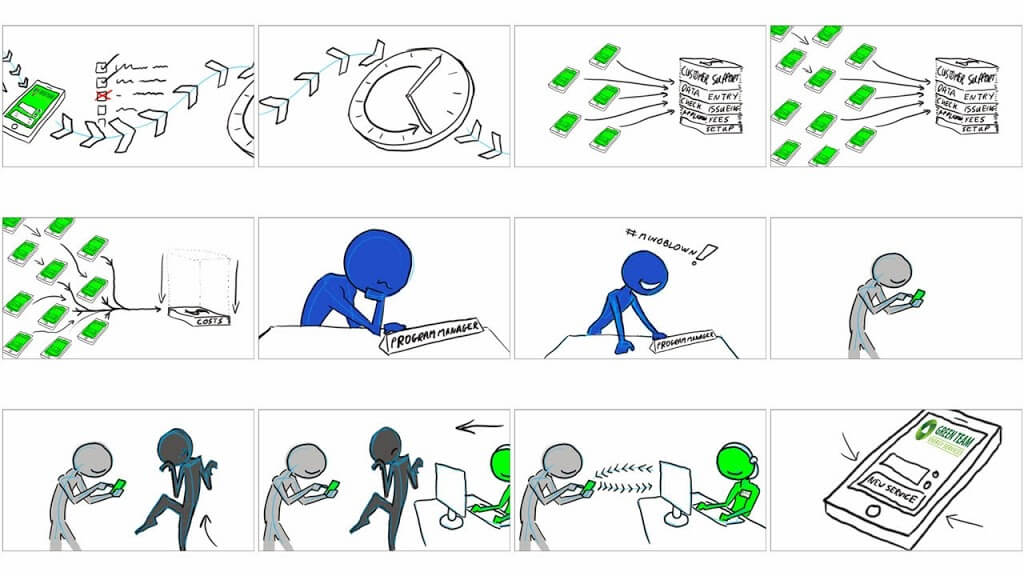 So once the storyboard were pretty much locked down, the only thing that changed much from there was that the client decided to add more colors. I actually used this to color code all the characters so we’d know who was who… then all the colors changed! So you’ll see the colors differ from storyboard to final product in the side-by-side animatic. 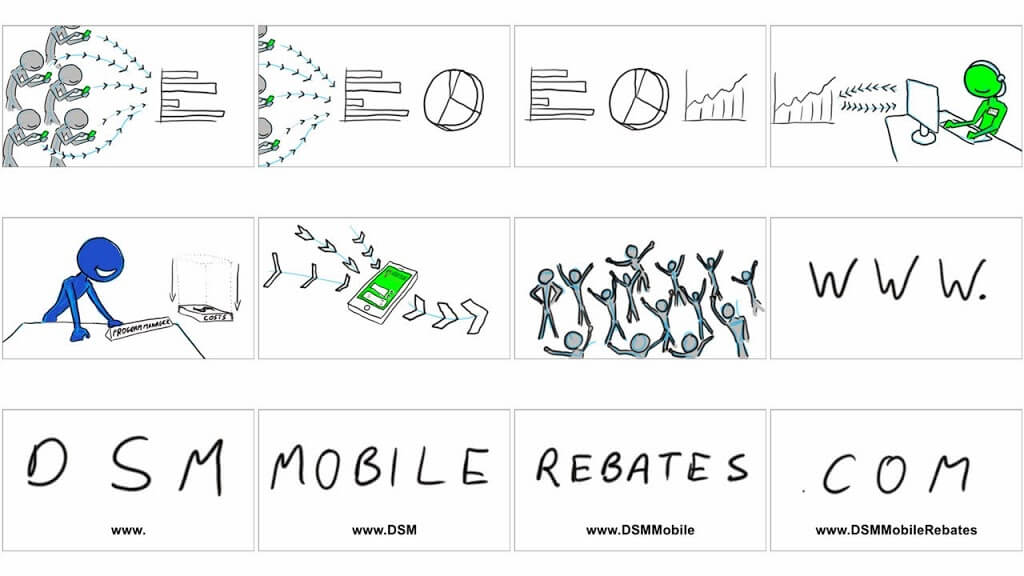 Ultimately this was such a satisfying story-boarding process that I’ve since gone on to do more story-boarding, really getting back to my routes as a 2D trained animated filmmaker. Finally, after 15 years in the industry doing CGI animation I’m actually using all those old skills in traditional 2D (I originally studied to be a 2D animator, before the industry changed course and almost completely killed off 2D animated features). I worked on this piece under my new company label, HEROmation, alongside Hatch Films.