I spent a few weeks working on this interesting project. On paper it could have been a potentially dry product demo/commercial, but actually the script had a little spark to it and the client had an interest in keeping things engaging. So with the same spirit I took to creating the visuals.

It was supposed to be two minutes or less. But when I got the script at two and a half pages long, I had to challenge the length and see if we could trim it. But ultimately this was about conveying specific information, rather than abiding by any fixed time slot. So the video ended up being 25% longer than it was originally planned for.

Take note… one page of script is roughly one page of screen time. Of course it can vary wildly depending on how it’s written and what the content is. But if you start there you’ve got a good guide. I’ve been on other projects where the producers didn’t know this and it’s come back to bite them in the butt later when, for a fixed bid, they’ve found themselves producing a lot more screen time than they anticipated… for free. So be careful when you’re given a screen time estimate from a client that doesn’t match the one-page-per-minute rule. Again it’s only a guide, it can vary wildly, but use it as a reason to investigate more closely. 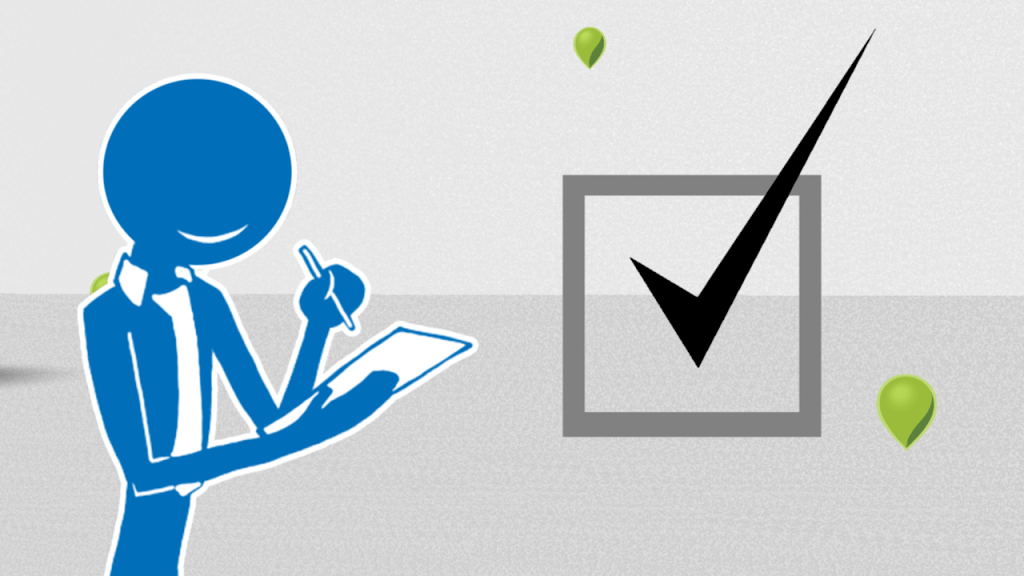 Back to this project… I was given an example video to use as a style guide. Essentially the client liked another product demo/commercial that had a limited, two color palette, some 3D elements and a few 2D character stills mixed in. It was simple in appearance but surprisingly complex in it’s structure, as it was largely just one camera move going through a variety of types of situations seamlessly. There were a few obvious places it may have been doing cuts (to make things more manageable) but for the sake of argument it was one camera move. 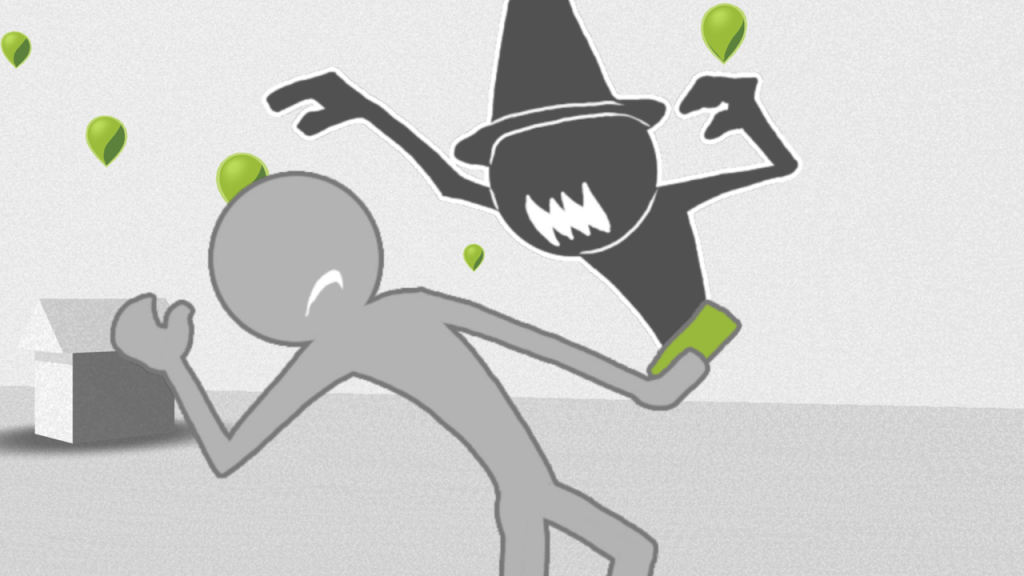 Since they wanted (what they perceived to be) a 3D video I was approached to direct the visuals, but the curious thing is that although the example video looked 3D, there were a healthy dose of 2D elements mixed in that were simply placed on cards and moved in 3D space (or composited). So with a limited budget it was reasonable to assume that not everything had to be 3D. This made it possible for me to be prudent about where to put my effort trying to make 3D assets, and where to stick to simpler 2D elements. 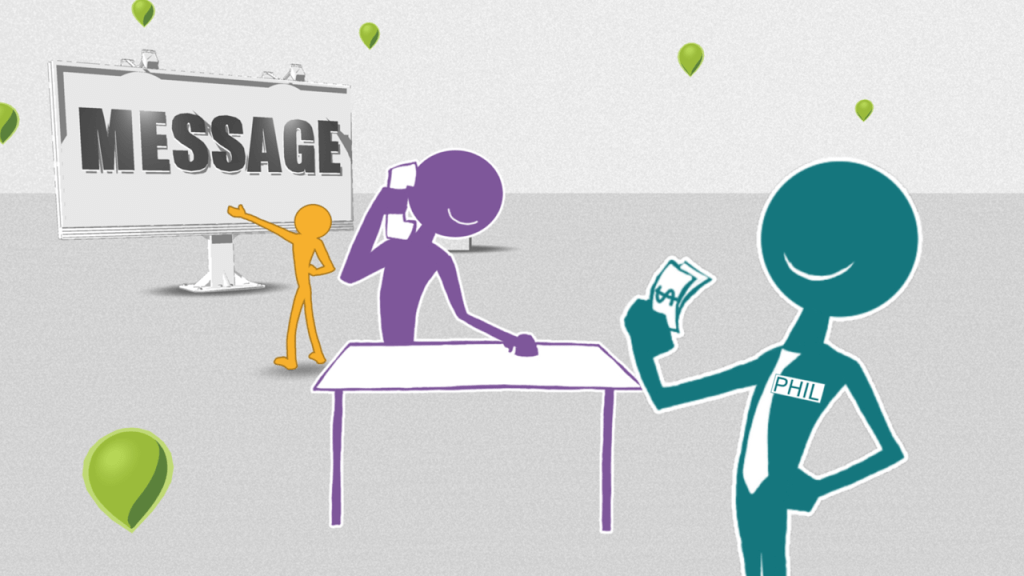 To keep things interesting I used more characters than the example video I was given. I tried a number of non-character based scenarios initially, but they were often vetoed in favor of the character reliant versions. I did a very simple test 3D character in a similar visual style but it was clearly going to take a lot longer to make it look good. With so many character moments I was pleased when the art direction style sheet I proposed was approved for a 2D style. That made it much easier to get a lot of interesting poses on the screen quickly. 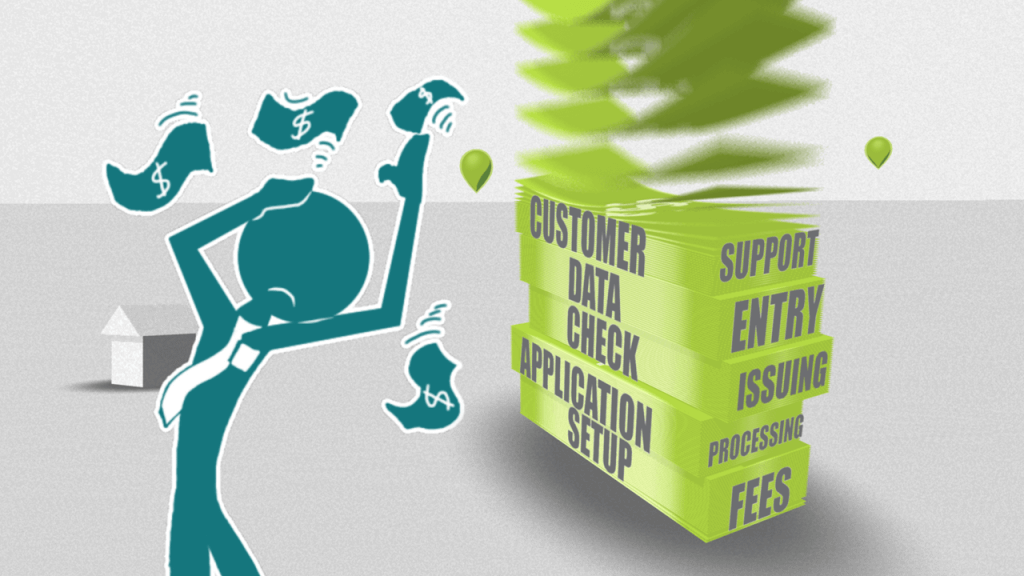 So once the storyboard was pretty much locked down, the only thing that changed much from there was that the client decided to add more colors. I actually used the colors to code all the characters so we’d know who was who… then all the colors changed! So you’ll see the colors differ from storyboard to final product in the side-by-side animatic. 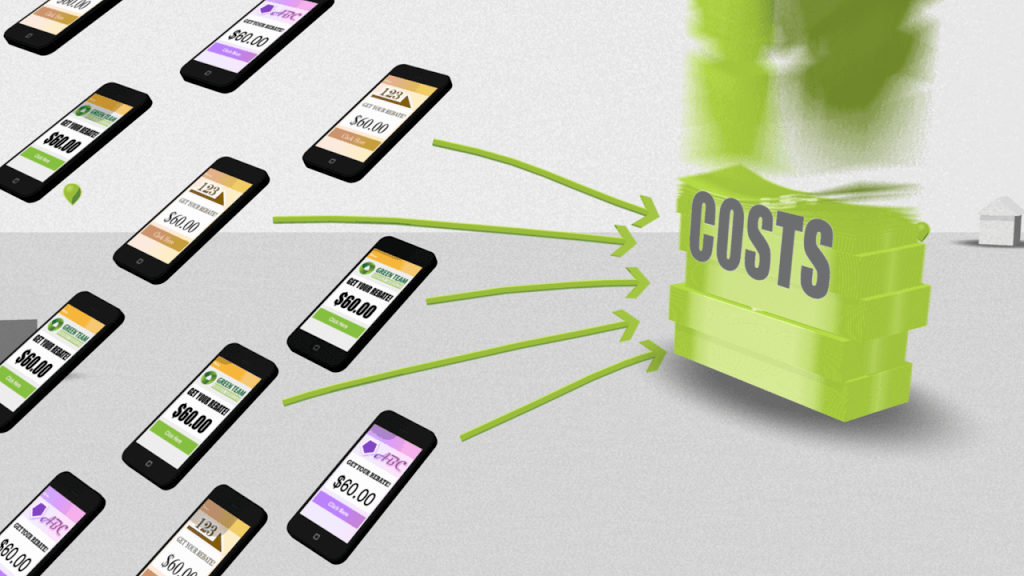 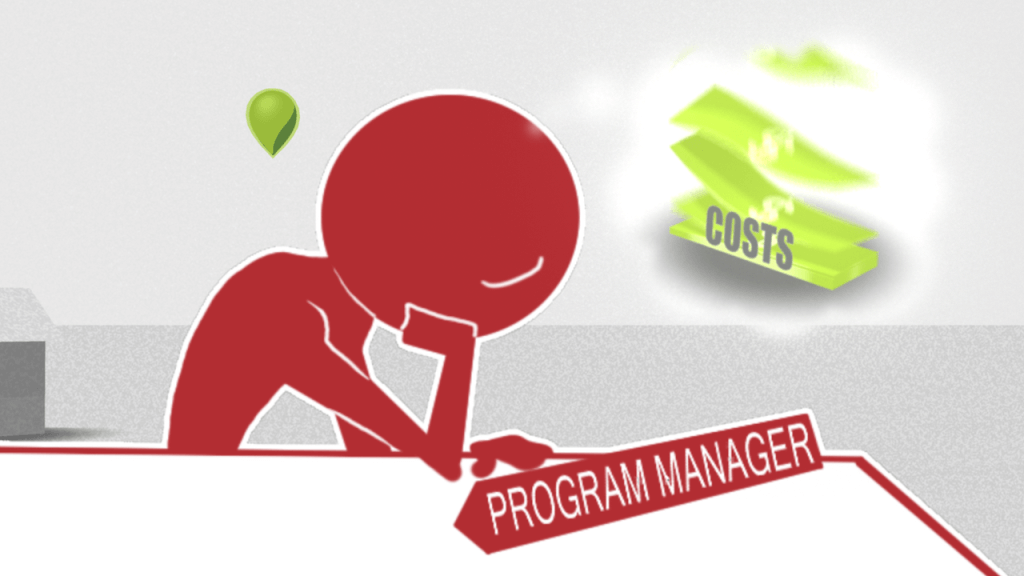 One image that re-occurred several times in the storyboards was the money. Individually a dollar note, isn’t complicated, but making piles of cash grow, shrink and fly through the air was a whole different matter. I went online to see if anyone else had done something similar, perhaps a pre-made asset I could buy to save me some time? But no-one had anything like it… that I could find, so I had to make a cash pile rig that could handle all the situations in the video. An interesting challenge, and I’m actually fairly pleased with the results. 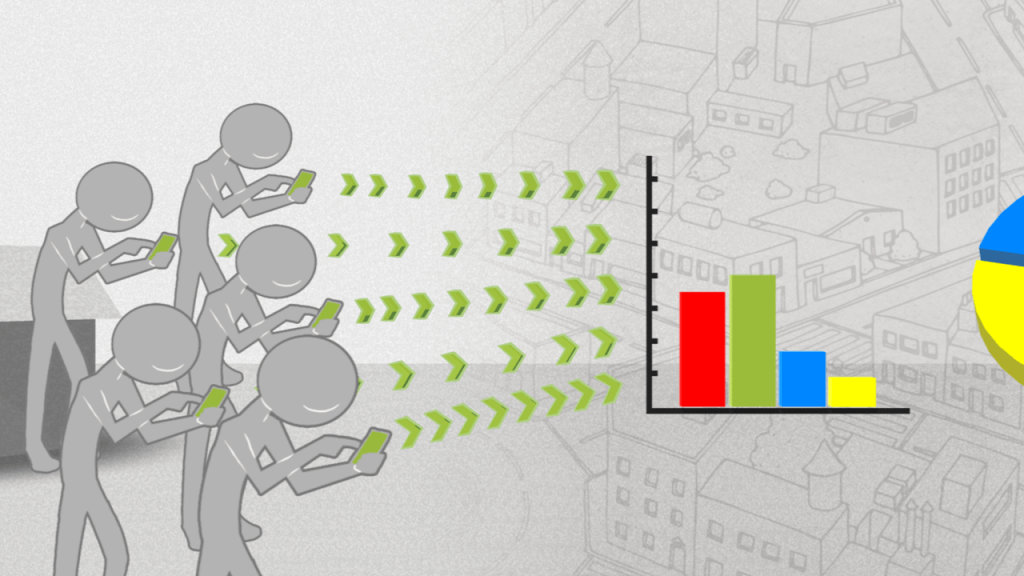 The other asset I needed to make was a bendy arrow, with re-occurring arrows along it’s length. Again another rig that didn’t exist to buy, so I made one. Again, the arrow isn’t the hard part, it’s the way it moves that presents the challenge. It turned out well, and even doubled as a phone transmission wave to represent the handsets sending data to the cloud. 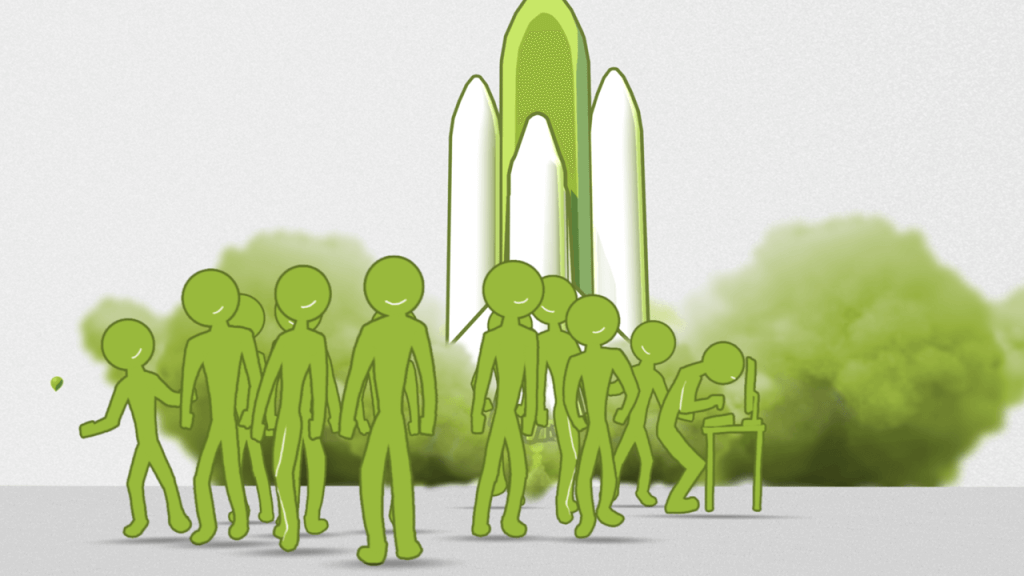 There were other scenes that were obviously going to work best in 3D and I set to making a library of assets. Fortunately while the 3D models may have been challenging, the textures were not (I was expecting to be limited to two colors). I wasn’t sure if I could get away with gradients at first. I created a few samples of the art direction, following their example, while also adjusting it for their own company website’s styling. I made a test animation to give an idea how the camera might move around this mix of 2D and 3D elements and the art direction was approved… initially. 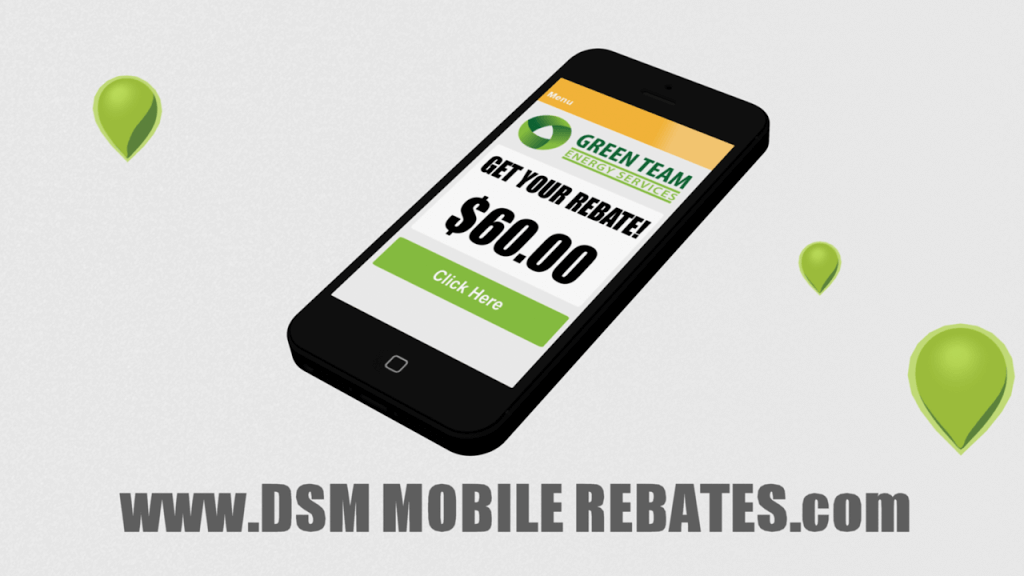 Designing the way the camera would move between scenes was an interesting challenge. Keeping the camera drifting gave the whole piece some consistency, but you couldn’t spend too long transitioning between scenes as it had to keep up with the voice over. So I ended up doing these six frame fast pans. The magic of such a short move is that you can get away with all kinds of things that you wouldn’t tolerate at slower speeds. Essentially I ended up with one 3D CGI scene with lots of mini setups, the camera zipping from one to the next. It would drift through the scene, in what ever move worked best for the meaning of that moment, then it moved on to the next. 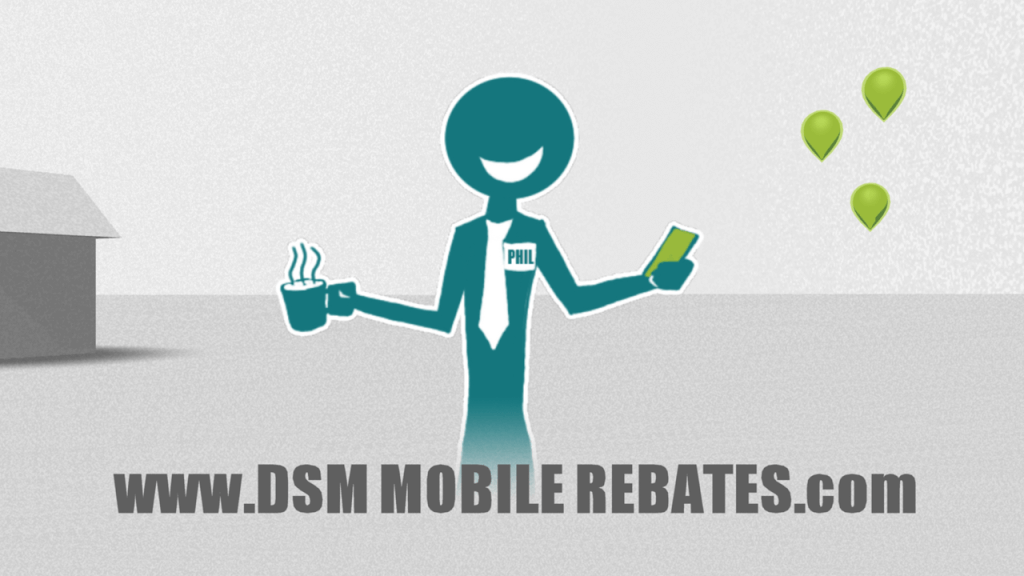 2D elements were placed on cards that were orientated towards the camera at all times. This worked well but you could get problems as the camera moved through space and two cards close together rotated through each other trying to face the camera.

I was fairly pleased with the end result, given the amount of information there was to communicate, the budget and the time I had to work on it. I worked on this piece under my new company label, HEROmation alongside Hatch Films.