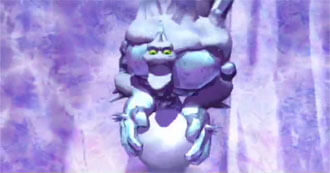 I originally created the Snowman Evolve scene with a more snowball like theme but as the character designs all changed this scene had to be updated as well. All the characters were generally made to look more detailed and aggressive, mostly through the addition of bumpy surfaces and spikes. In this particular case I actually preferred the original 'Snowman' design and I think he lost his snowball qualities in the update. So you can see both the final and the original versions here, along with the animatic I originally storyboarded below.

EARLY VERSION - MADE FOR ORIGINAL XBOX