Guardian of the Highlands 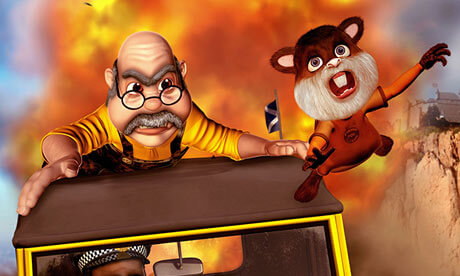 At first there were a number of interesting character animation shots to do and I took a back seat to my usual role while I learned the pipeline and evaluated the film's character rigs. It wasn't long before there were some staff changes and suddenly lots of slack to be taken up in other departments which revealed new opportunities for development in the pipeline. About six weeks after I'd started, I took over as the Animation Supervisor and once we were moved into our new animation room things started to really get going, with a small but dedicated department of animators and a number of outsourced studios in numerous locations supporting and subsidising our work.

We got into a good routine of weekly group animation critiquing sessions, on top of the usual one on one sessions I would do dozens of times per day. Doug and I would also go over the dailies for one of the external animation studios to give them feedback and guidance.

I was on the project for about six months total and in that time we really picked up the pace of production and get about 30 minutes of the films footage completed. I also took it upon myself to nudge other departments along improving the pipeline and general workflow of the project. At times we'd take in whole sequences of the film into animation and re-edit the layouts and storyboards to make a more interesting film.

It's not the strongest of films, for too many reasons to list, but we were doing the best we could with a difficult situation. I certainly learned a lot as up to this project I'd only worked in games and I did one short stint in film. This was an opportunity to stretch my knowledge at a higher level. It was also really fun to be working in an animation focused working environment, where everyone was focused on strong performances and doing the best they could for the story. That doesn't happen often for animators working in the UK, so it was greatly appreciated.

Eventually personal circumstances dictated that I had to move to another city, and I leave them in the capable hands of my friend Roberto. The film eventually came out under the title of 'Sir Billi' in the UK and then 'Guargian of the highlands' in the US.

Viva Piñata: Trouble in Paradise
Dogs on a Seesaw