Dogs on a Seesaw 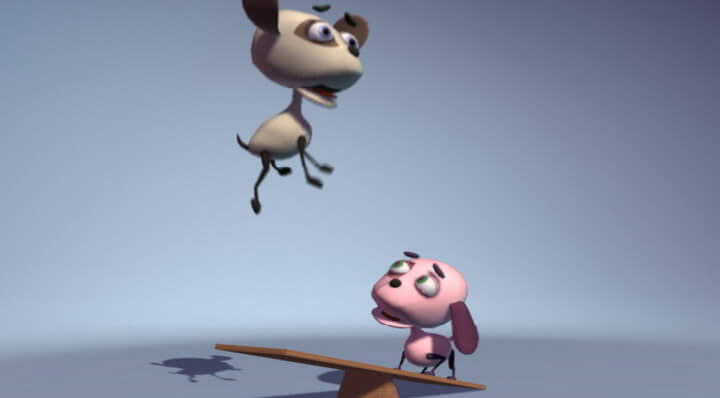 I started this pet project with the intention of doing some four legged animation, with a jump and some balance/weight issues to address. It began with the dog jumping onto a seesaw with a weight on the other side reacting to the seesaw tilting. Then it occurred to me that the dog’s action wasn’t as interesting as what the weight was doing as it flew up, bounced and rocked around. So I thought it would be even more interesting to add a second sleeping dog in the place of the weight. Then I focussed on what the second dog had to do to deal with the shock and the continuing rocking action of the seesaw. I decided to make them male and female dogs so that there was an implication of separate character types. Admittedly this plays into some stereotypical male/female dynamics but it worked as a short hand to make the scene make sense quickly without any more explanation. I added screen time to establish the scene and gave the female dog time to show thought processes, and the rest of the timing was based on the seesaw. I regret that once the seesaw starts going the timing of the scene seems a little fast, but I was trying to stay true to the physics, and I couldn’t add screen time to space it out.

By far the biggest issue I faced for this shot was the dog rig. I looked for a free four legged rig on the internet and found very few available. This was the least offensive looking dog rig I could find at the time, but it proved to have a very simplistic rig that didn’t allow for everything I wanted to do with it. So, after I started animating with it, I started adding custom alterations to the dog. I added squash and stretch to the body, head and neck. I give it switch-able IK/FK legs. I improved the look of the character and made facial expressions. I added so many additional custom solutions that it added significantly to the time it took to get the shot finished. I also had to add numerous controls to make things on the bending seesaw look good. Naturally in a shot with so many moving contact points (and legs) the amount of constraints I needed was astronomical, so that took a lot of planning to get the desired look.

Ultimately I’m reasonably pleased with the result… but is any animator ever happy with their work?