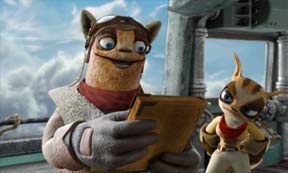 Hot off the completion of the main Skylanders Giants cinematics we were tasked with a set of four new cinematics for a different Nintendo 3DS game based on the Skylanders characters. This time we had to work in Stereoscopic 3D, which was actually new territory for me. I understood a lot of the fundamentals from following the business and taking some lectures from experts, but I'd yet to spend much time practicing it. There was no time to worry about it though and we dived in. Panda Panther had done a Stereoscopic commercial the year before (also a Skylanders project) so they had a band of stereo experts to call upon to bring me up to speed.

This time around I was asked to step up to Animation Supervisor, so it was up to me to run the animation floor. The crew wasn't as large (about 15 animators) and we didn't have as many remote artists working with us. But it was a much more mangable team size and things went a lot more smoothly. Last time we literally ran out of desks and computers to place all the talent in-house. This time we could all sit together in one area and it reduced and miscomunication. I missed having some of the previous crew but we were a lot tighter team this time around, we all knew each other's strengths and limitations.

There was a second project running along-side us, un-related to Skylanders. I managed to get my good friend Lucas Martell in to run it, which (up to this point) is the closest I've had the opportunity to work with him in all the years I've known him. I consulted on the rigs and some of their pipeline choices but ultimately it was a different project and I had my hands full with Skylanders. Still, it was cool that we both occupied one half of the basement and got to see each other in action for the first time. Towards the end of his project we took on many of his team members to supliment the Skylanders 3DS crew.

There were some characters we were re-using from the previous Skylanders job, but we took the opportunity to polish the rigs and models a bit further. With many of our pipeline problems solved we were able to focus on a much better workflow from pre-viz, through blocking and animation. We actually had less time than the previous project to make the amount of footage we had to do but it all seemed to be much more relaxed this time around and most people could actually go home at regular hours.

The new challenge was setting up every shot in stereo 3D. We had the old style red and blue cardboard glasses that we could preview things in Maya with. This gave us a great sense of how well the shot was working, choosing the position of the screen plane and tweaking the other values to get a good sense of depth. The tricky part was that it took a while to get to a point that we we were able to see the shots in sequence so even if a shot looked good in isolation it could often be quite jarring watching shots cut across multiple depths. I can't say we refined it quite as much as we'd have liked in the time frame we had but we did spend a good chunk of time near the end making as many tweaks as possible and ultimately everyone was very happy with it. The fun thing is seeing just how a shot can get broken in 3D by simple mistakes. We had props showing up in one eye that weren't there in the other eye, clouds travelling in opposite directions in each eye and things touching the edge of the frame (which can feel like something is slicing your eyeball). Nothing like that made it into the final product, but we did have to watch everything on the actual 3DS screen all the way through, many times, to spot problems. It became a bit of a badge of honour to catch something like that and fix it. Fortunately you don't need 3D glasses to view it on the 3DS but you did have to hold your head in roughly the right spot to see things how they were intended. This was a one man job, as we only had one 3DS and one sweet spot!

These sequences were largely set flying up amongst the clouds so there was also a lot of work to be done on Final Layout set dressing the shots with clouds moving along in the background. But as always final layout does afford the luxury of tweaking the cameras to respond to the performances so it was an extra layer of love we got to put into everything. It was also an opportunity to re-check the 3D since we were improving our approach to stereo all the time.

Like the previous Skylanders cinematics we didn't have a lot of time to animate to a high level of polish which was disappointing, but asside from that the finished product, again, looks really nice and that can be largely attributed to the lighting, rendering and compositing crew. These Skylanders projects have been some of the nicest looking projects I've worked on. I'm looking forward to seeing all these Skylanders sequences in game, but in particular I'm curious to see the 3DS version on the new larger screen 3DS.