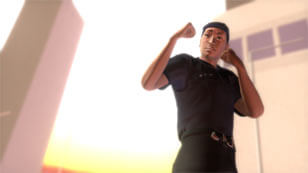 I'd wanted to do something acrobatic like this since my University years but when Disney's Tarzan came out I opted not to do it as I figured it would be seen as a rip off, since then Spiderman has also achieved similar feats. Well, in 2007, I felt it was time to have a go anyway to add a little variety to my reel. The character model and texturing was done by my friend Jamie and I rigged it using Setup Machine 2. I've also sculpted a series of facial expressions and incorporated them into the rig with Richard's assistance. I used Flipbook and Grease Pencil to help plan out the shot in the early stages, and Maya to animate in 3D.

Along the way I used video reference of acrobats and even shot a few things myself to help with the landing (not that I could do any of the rest of this sequence). I also discovered (after I'd finished) that this sort of activity has a following and it's called 'Parkour' or FreeRunning.

I decided to make my work in progress available for the public to see as it shows an interesting progression from one stage to the next, swithcing from 2D to 3D, and back again a few times to solve each problem. You can read a thread charting the progress of this shot at the 11 Second Club forum.

I revisited this piece a couple of times to add new tricks I'd learned. In 2013 I broke away from the single camera and experimented with cuts and a variety of compositions... plus a little slow motion for good measure.