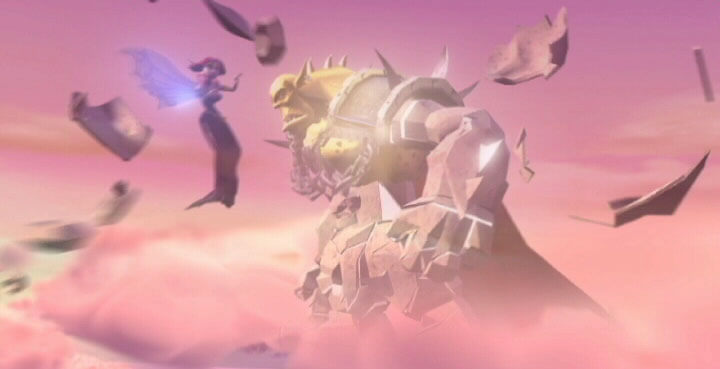 Funnily enough this sequence was originally conceived for the purposes of a trailer. Nick and I (our concept artist and a past animator) both felt strongly that it was time we did an advert that eluded to the story of the game rather than just quick cuts of the gameplay. So after a meeting about what we wanted, I designed this idea of seeing mini pivotal scenes from throughout the story glimced briefly in the clouds before the camera sweeps down to the castle below to start showing off the characters in action. It was enormously effective and you can see that trailer here. It was also my intension to use this in the game and it was logical that it would go at the start, which it did at first. Strangely it was pulled away from the start at one point and used in a crystal ball scene for a while until everyone came to their senses and realised it would work much better as our intro. At which point it had to go through a major update to make it as impressive as it could be. We added the Kameo jumping off the bridge idea to put the player straight in the action, and since Chilla (the Ice Ape) didn't have an evolve scene of his own it made sense that this would be the first character you'd see her change into. It became one of the more spectacular transformations and I loved the idea that the transformation would lead you seamlessly into the gameplay. So the very next thing that happens is Chilla sliding down the icy wall of the castle under the player's control.