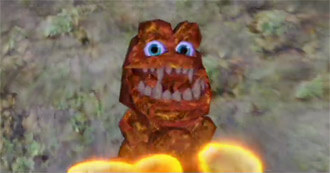 This was a scene that was initially worked on my my friend Neil, but when we decided to revamp all the cut-scenes for the Xbox 360 Neil had moved onto another team. So I polished up the first half without changing too much and started the second half again from scratch. The original version was done at a time when we were taking a lot of shortcuts as part of the style of the scenes, but we'd taken all the other scenes a lot further and it was time to do something equally impressive for this.